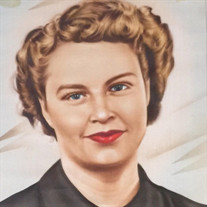 Born Nora Marie Anderson on May 23, 1934. She died in Pauls Valley on Saturday, October 3, 2015. Marie, as she preferred to be called, was raised in Garvin County. She married a Pauls Valley local, Lawrence Elmer (Larry) Blankenship, at the age of eighteen. Larry was in the Air Force, so she spent the first twenty years of her adult life as a military wife; some say the toughest job in the military. By the time she was twenty-four they had five children. She was often raising those children on her own, while Larry was overseas or on temporary assignment away from their home base. After retiring from the Air Force, they returned to central Oklahoma. She worked for the University of Oklahoma, and for Sherry Classics in Purcell. After Larry’s heart attack, they moved to Pauls Valley and were both active in the local chapter of the VFW (Veterans of Foreign War). Marie later served as the VFW Ladies Auxiliary President for several years. Always an excellent seamstress, she made most of her children’s clothes, and taught all three of her daughters to sew, to crochet, and to knit. When Marie and Lawrence purchased Valley Cleaners in Pauls Valley, she ran the business and did all their alterations until it sold. After a prolonged illness, Marie lost her first husband in 1989. A new widow, Marie met and eventually married a local businessman, Wayne Price, who was the owner of Price’s Tire Shop in Pauls Valley. They partnered in running the tire shop for most of their time together. Wayne and she continued as active membersof the VFW. They enjoyed spending their leisure time together and with his family, fishing and traveling, both locally and across the United States. Marie was preceded in death by her parents Elmer and Minnie Mae (Stephens) Anderson, her sisters Ruthie Mae Anderson and Wanda Sue Anderson, herbrothers RC Anderson and Earnest Anderson, first husband Lawrence Elmer Blankenship, second husband Wayne Price, her oldest son Pete (LarryMitchell) Blankenship, and her oldest granddaughter Amanda Cathleen Brinley. She is survived by: Brothers: Calvin C. Anderson, his wife Dorothy, their children Patricia, Teddy, Don and Carl. James Elmer (Jimmy) Anderson, his wife Patsy, their children James,Dwight, and Stephen Anderson. Daughters: Marieta BlankenshipHobbs and her husband John, Cathy Blankenship (Brinley) Beadles and her husband Gary, Nancy Ellen Blankenship Trent and her husband Samuel C. Trent. Son: Carl Dean Blankenship and his wife Delma. Daughter-in-law: Marilyn Blankenship(Pete’s wife). Grandchildren: Abby Kay Blankenship, Langdon Atkins, Stacy Atkins and his partner Leslie Jones, Stacy’s daughter Ashley Stillwell, Jason Atkins and his wife Tammy, their children Jason Matthew, Alexis Faye, Savannah Maye, Owen Ray, Natalee Kaye, Amanda Grace, Tabitha Trace, Karlie Shaye and Isaiah Zay, Jonathan Atkins and his wife Kristina, their children Jonathan Lawrence Atkins and Kailey Marie Atkins, Jason Hobbs and his children Caitlyn Hobbs, Leicie Hobbs and John Hobbs, Scott Lawrence Brinley and his wife Becky, their children Devon Posey and Tyler Scott Brinley, Matthew Allan Trent, Rebekah Marie Trent, Joshua Ian Blankenship and Carla Nicole Blankenship. Stepdaughters: Julie Foster, Linda Beaty, Kathaleen Stewart. Stepson: Kevin Price. Step Grandchildren: Brandy Vallandingham, Mark Richardson, Josh Richardson, Amber Beaty, Matthew Price, Stephanie Price, Vickey Price and Ian Price. Marie Blankenship Price will be remembered as a smart, fun loving, and feisty woman by all who knew her. In lieu of flowers the family requests donations be made to Oklahoma Medical Research Foundation (OMRF). Their researchers focus on such critical areas as cancer, heart disease and Alzheimers. A minimal seven percent of your donation goes toward the administration of this foundation and it is one of the nations leading independent research institutes. The web site is www.OMRF.org. Funeral services will be held 1:00 p.m. Tuesday, October 6, 2015 in the Wooster Funeral Home Chapel with Steve Bratcher & Samuel C. Trent officiating. Interment will be in the Mt. Olivet Cemetery under the direction of Wooster Funeral Home. You may send a condolence to the family at www.woosterfuneralhome.com

Born Nora Marie Anderson on May 23, 1934. She died in Pauls Valley on Saturday, October 3, 2015. Marie, as she preferred to be called, was raised in Garvin County. She married a Pauls Valley local, Lawrence Elmer (Larry) Blankenship, at the... View Obituary & Service Information

The family of Nora Marie Blankenship Price created this Life Tributes page to make it easy to share your memories.