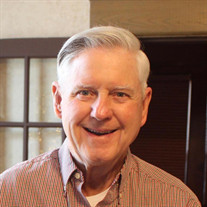 Nolan Leon Nelms was born August 26, 1941 to Nolan and Doris McGregor Nelms in Maysville, OK. He went to be with his Lord and Savior Jesus Christ after an accident on August 25, 2021, 1 day before his 80th birthday celebration. He graduated from Wynnewood High School in 1960. Nolan married Mary Rollow on August 4, 1991, and they had just celebrated their 30th wedding anniversary. He lived most of his life in Wynnewood and retired in 2011 after working at the Wynnewood refinery for 30 years. He and his wife Rhea owned the skating rink by Wynnewood for many years, and a generation of kids grew up knowing his caring heart. Nolan was a kind and loving precious person, and if you knew him, you loved him. He made an impact on so many more lives than he ever knew. He loved to work outside on his yard and garden and was always fixing all kinds of things around the house. He was a caretaker and would do anything for anyone, including feeding the birds and hummingbirds which he loved to watch. He always had a smile for you, and showed his Christianity by how he lived his life; no words necessary. He helped create a wonderful large family who he loved with all his heart, and he took great pride in all of them. Nolan loved OU Football, and cheering for former Sooners playing in the NFL. He also enjoyed going on trips with Mary to Alaska, Yellowstone, Redwood National Park, Colorado, North Carolina, and Florida, and family trips to Disneyland and Disneyworld. He also loved cheering for his grandkids at all their games and events. Nolan is preceded in death by his son, Christopher Nelms, his sisters, Thelma Willis and Pauline Ficklin, and his parents. He is survived by his wife Mary, brother Gene Nelms, and his sisters Lavelle McAlister, Maxine Drake, and Jan Nevins. Also his son Dennis Nelms and his wife Darlene, son Shannon Smith, daughter Patrice Williams and her husband Barry, son Chris Moxley and his wife Laura, daughter Kelli Manning and her husband John, daughter Melissa Nation and her husband Scott, daughter-in-law Stephanie Nelms, and daughter Stephanie Fischer. Also grandchildren Kary Nelms and his wife Heather, Kara Nelms, Luke Smith, Madeline Bond and her husband Jackson, Kayla Halford and her husband Josh, Mika Miles, Cason Miles, Noah Williams, Morgen Williams and her husband Gareth, Jorden Moxley, Garrick West, Logan West, Hunter Nation and his wife Haven, Austin Nation, Gavin Nation, Leah Nation, Haley Nelms, Nolan Nelms, Emma Fischer, and Ian Fischer, 9 great-grandchildren, and lots of nieces and nephews.

Nolan Leon Nelms was born August 26, 1941 to Nolan and Doris McGregor Nelms in Maysville, OK. He went to be with his Lord and Savior Jesus Christ after an accident on August 25, 2021, 1 day before his 80th birthday celebration. He graduated... View Obituary & Service Information

The family of Nolan Leon Nelms created this Life Tributes page to make it easy to share your memories.