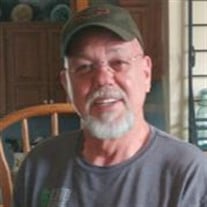 NICKY DON PHILLIPS Nicky Don Phillips passed away on Thursday, March 15, 2018 in Tulsa, Oklahoma at the age of 72. He was born in Pauls Valley on April 5, 1945 to Neal Willard and Mary Arleeta (Hook) Phillips. He went to Pauls Valley schools for 12 years and also attended OSU. Nick proudly served in the United States Army from Sept 1965 to Sept 1967 and is a Vietnam Veteran. Nick was a very kindred spirit and was very easy going. He was a member of VFW and his hobbies were riding his bikes, relaxing, hunting and fishing and working on his toys (cars and motorcycles). He always carried his Bible with him and read it quite often and was a Christian. As a child, growing up in Pauls Valley, Nick was always trying to do experiments and always liked a challenge. Once he admitted that the storage building in the back yard mysteriously burned to the ground was the result of one of his Science Experiments. Mom and Dad never knew what actually happened. He always had a love for his motorcycles and he always had one or two of them at all times. Growing up he would spend a lot of time at this grandparent’s farm near Elmore City in the summer. They had him doing chores and plowing the fields and planting. He enjoyed hunting and fishing when he could. He learned how the rural life was and he enjoyed it. Later he moved away to Tulsa where he made his home for many years. He was employed by McElroy Manufacturing Company as a mechanist for 32 years and retired in 2016. He wasn’t ready to retire but figured out that was the place to be. Nick is survived by his son, Michael R. Phillips of Elmore City, Oklahoma Grandchildren: Chazey Phillips and Krystell Phillips of Midwest City, Oklahoma 2 great-granddaughters: Nevaeh (11) and Capri (2) of the home Two sisters: Neila Sue Beasley and her husband Jim of Pauls Valley Linda Lou Strom and her husband Nick of Oklahoma City, two nieces, Sandy J. Ellison of Lebanon and her husband, Charles and Lisa Lunsford of Stratford, numerous uncles, aunts, nieces and nephews, cousins, and many friends and acquaintances. He was preceded in death by: His parents: Neal W. and M. Arleeta Phillips Grandparents: Willard and Hellon Phillips and one brother-in-law, Loyd (Sonny) Milligan And his beloved niece, Cindy Lea Brown of Blanchard, Oklahoma Graveside services are scheduled for 11:00 a.m., Wednesday, March 21, 2018 at the Elmore City Cemetery with Rev. Joseph Langley officiating. Services are under the direction of Wooster Funeral Home. You may send a condolence to the family at www.woosterfuneralhomes.com.

NICKY DON PHILLIPS Nicky Don Phillips passed away on Thursday, March 15, 2018 in Tulsa, Oklahoma at the age of 72. He was born in Pauls Valley on April 5, 1945 to Neal Willard and Mary Arleeta (Hook) Phillips. He went to Pauls Valley schools... View Obituary & Service Information

The family of Nicky Don Phillips created this Life Tributes page to make it easy to share your memories.