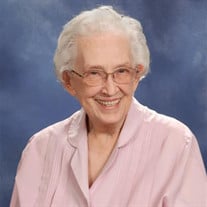 Laura Nadine Conrad was born on February 18, 1932 in Cisco, Texas to parents Audra Stephens Conrad and Louis Reynolds Conrad. After spending the first decade of Nadine’s life in Texas, the Conrad family moved to Oklahoma and Nadine spent the next 70 years living in Garvin County, Oklahoma. Nadine graduated from Elmore City High School in 1949 as salutatorian of her class, and received her Bachelor of Science degree from the University of Oklahoma in 1954 with a major in lab technology. She passed her exams to become a Registered Medical Technologist and subsequently spent 32 years working in this field at the Robberson-Shirley Hospital/Clinic in Wynnewood, OK. Shortly before retirement in 1989, she married her long-time fiancé, Monroe Himes. Nadine was widowed in 2012 after 23 years of marriage. Later in 2012, Nadine moved to Spokane, WA to live near a niece. At age 80, she had her very first airplane ride as part of the moving process. She spent three happy years enjoying the community at Fairwood Retirement Village, where she was especially active in the Quilters group. She also enjoyed the Keenagers and Quilters groups at Northview Bible Church the past three years. Besides excelling at her hobbies of quilting, sewing and knitting, Nadine spent many years as a member of the Oklahoma Order of the Eastern Star. After a couple of months of declining health, Nadine was diagnosed with cancer of the adrenal glands and passed away just three days later on November 16, 2015. She is survived by her brother Jim Conrad (Linda) of Spokane, WA, niece Jena Conrad Coffey (David) of Spokane, WA, niece Jonna Conrad Way (Alan) of Powder Springs, GA, and nephew James Conrad (Holly) of Friendswood, TX, plus 7 great nieces and nephews, and two great-great nieces and nephews. Graveside services will be at Oaklawn Cemetery in Wynnewood, OK at 10 a.m. on Tuesday, November 24 under the direction of Wooster Funeral Home. A condolence may be sent to the family at www.woosterfuneralhomes.com.

The family of Nadine Conrad Himes created this Life Tributes page to make it easy to share your memories.