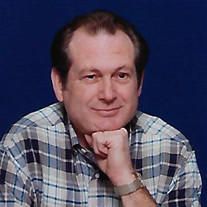 Mike Howie Roy Michael “Mike” Howie of Elmore City was born to Roy Basil and Irene (Stubbs) Howie on July 17, 1942 in Ardmore, Oklahoma and passed from this life on Sunday, July 22, 2018 in Pauls Valley. Mike grew up in the Ardmore community and graduated from Ardmore High School. He was one of 45 high school students selected from around the state to participate in a Tool & Die apprenticeship program at Western Electric. He finished as one of the top 15 students who completed the 2 year program. He later received his engineering degree at OCU. During a lay-off at WE, he worked as an engineer for TOTCO. He returned to Western Electric/AT&T/Lucent Technologies as an engineer and retired in 2000 as the supervisor over the maintenance department and the same tool shop in which he began his career On March 28, 1980 Mike married Carolyn “Carol”Keever in Norman, Oklahoma. After retirement in 2000 Mike and Carol moved to an acreage near Elmore City and built a home. They contracted the steel framing & roof, bricking, heat & air. The wiring, plumbing, walls and flooring were completed by the two of them, and surprisingly, the marriage survived. Mike was a Mason and a member of the Pauls Valley United Methodist Church. He enjoyed antique tractors and do it yourself building projects. Before Mike’s illness he and Carol began working on an addition to their home. The highlights of his life were the birth of his daughters, grandkids, and marriage to Carol. The most important thing he taught others was self-confidence and his sense of right and wrong. Mike knew how to love and lavished that love on his family while also loving and serving others. Mike is survived by: Wife Carol, Sister Pat and husband Eddie, 2 daughters, Vonda and husband Nick and Dawn widow of Ed .Grandchildren, Brock and wife Gabrielle and Gt. Granddaughter Holiday, Hannah and husband Jeremy ; well loved nieces Patricia & Cheryl and nephews Vince, Mark, Daniel, Sam and Paul as well as numerous great and great-great nieces and nephews. Mike is preceded in death by: parents Roy & Irene Howie; 3 brothers, Warren, Richard and Carl; and son-in-law Ed. Memorial services are scheduled for Friday, August 03, 2018 at 10:30 a.m. in the First United Methodist Church in Paul Valley with Rev. Don Griffin officiating. The family requests any memorials be made to the First United Methodist Church, P. O. Box 385, Pauls Valley, OK 73075. You may send a condolence to the family at www.woosterfuneralhomes.com

The family of Mike Howie created this Life Tributes page to make it easy to share your memories.