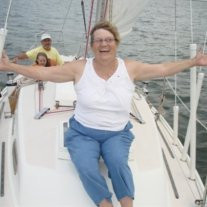 Merline McCurley Merline McCurley was born to Emmett Elmer Ellis and Veniece Marlene Ellis on April 15, 1946 in Yazoo City, Mississippi and passed from this life on Saturday, December 7, 2013 in Oklahoma City, OK. Merline went to elementary school in Homer, LA and spent her middle school and highschool years attending Pauls Valley Schools. In 1964 she graduated from Pauls Valley High School and began her college education at East Central University in Ada, OK. She has lived in several different places but always ended up back home in Pauls Valley, OK. Merline acquired a wide range of experience having worked many different jobs in many different places, but is perhaps most well known in her jobs as either “Mom” or for her numerous years as the secretary for the Garvin County Commissioners Office from which she retired in 2008. She had many hobbies such as camping, bowling, hiking, fishing, boating and shopping with her daughter, Samantha. She was a very loyal and dedicated friend, and taught her family the true value of love, respect and honor. She never met a stranger and treated everyone she met as if they were a friend. The highlight of her life was her daughter Samantha. Ms. McCurley is survived by: Her Son: Jay Reavis and his daughters, Nicole Reavis and Crysta Poage of Yukon, OK Daughters: Tracy Reavis and her children Aspyn and Kole Cottom of Farmington, NM ; and Samantha McCurley of Yukon, OK Brothers: Elmer and wife Peggy Ellis of Oklahoma City, OK; Edward and wife Mary Ellis of Pauls Valley, OK; and Guy and wife Karen Ellis of Cleveland, TN She also has one great-granddaughter, Elizabeth Poage She was preceded in death by two sisters: Geraldine Spargo of Ridgecrest, CA and Treva Bridwell of Houston, TX Funeral Services for Ms. McCurley are scheduled for Tuesday, December 10, 2013 at 11:00 a.m. at the Wooster Funeral Home Chapel in Pauls Valley, OK. Interment will be in the Dixie Cemetery near Ringling, OK under the direction of Wooster Funeral Home. You may send a condolence to the family at www.woosterfuneralhomes.com

The family of Merline McCurley created this Life Tributes page to make it easy to share your memories.