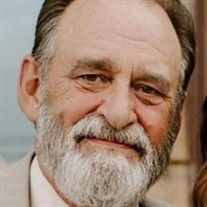 Mark Edward Wilson fell asleep in the Risen Lord on Friday, January 28th at the Oklahoma Heart Hospital, with his family by his side. Mark was born on August 5th 1955 to Wayne and Helen Wilson in Holdenville, Ok. He graduated Holdenville high school in 1973 and attended East Central University, after which he went to Baylor Dental School. He finished both his undergraduate and doctorate degrees a year early and at the top of his class. In 1980, he bought his dental practice in Pauls Valley where he practiced for 37 years. He spoke often about how much appreciation and gratitude he had for all of his patients throughout the years. He met Karen, the woman who was everything he wanted in 1986 and they were married July 30th, 1988. They shared so many happy years together and raised two children. He retired in 2017 after beginning treatment for prostate cancer. By God's grace he was given a clean bill of health a year later. He was so humbled and appreciative of all the many prayers everybody so generously offered to God on his behalf. We sincerely believe that his recovery was a God given miracle. Since then he has thoroughly enjoyed his retirement working on his farm and spending time with his family. He got to meet and know his first grandson. He was so thankful for the chance to be reunited with his two children from a previous marriage. These were some of the best years of his life, and he gained so much fulfillment and happiness from them. They were a gift from God. Mark had a lot of hobbies he shared with many people. He so enjoyed working on his farm throughout the years. Everyone in town knows how he took care of his land, and he enjoyed hearing people talk about his grass, even though he wouldn't have admitted it. He made some of his best friends at Lake Murray, where he had a houseboat on BR6. He rode motorcycles a lot and he golfed in his younger years. Anyone who was around him knew his exacting personality and demand for perfection in everything he did. He took a lot of pride in his work, everything from dentistry to baling hay. He possessed a deep and genuine belief in God that dictated his life, so much so that he would often prescribe prayer for his patients. He felt very strongly about sharing that faith with the people who were close to him and directing them on the right path toward God. All the while he carried a deep sense of unworthiness and humility which he confided to those closest to him. He is survived by: his spouse Karen Wilson of the home. Children: Lukas Wilson and wife Taylor of Pauls Valley, Laydin Fraley and husband Ryan of Pauls Valley, Jenni Wolf of Moore, Marcus Wolf and husband John McQuillen of New York. Grandchildren: Symeon Mark Wilson, and another due in June. Brothers: Mike Wilson and wife Della of Pauls Valley, Lee Shipley of Edmond and Larry Shipley of Edmond. Other survivors: Uncle Doyle Wilson and wife Mary of Holdenville, and a host of nieces, nephews, and cousins he held dear. He is preceded in death by grandparents: Willard and Iva Wilson. Parents: Wayne Wilson and wife Lillian, Helen Wilson, and father-in-law Buddy Hammett. Mark is being interred in a private service at his farm. Memorial services to celebrate Mark's life are scheduled for 1:00 p.m. Friday, February 11, 2022 at Crossroads Church with Pastor Joel Downing officiating.

Mark Edward Wilson fell asleep in the Risen Lord on Friday, January 28th at the Oklahoma Heart Hospital, with his family by his side. Mark was born on August 5th 1955 to Wayne and Helen Wilson in Holdenville, Ok. He graduated Holdenville high... View Obituary & Service Information

The family of Mark Wilson created this Life Tributes page to make it easy to share your memories.