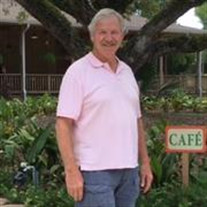 Leslie Mark Loman was born January 6, 1953 in Chickasha, Oklahoma to Lloyd and Lucile (Selzer) Loman and passed away unexpectedly on Wednesday, March 20, 2019 in Shay, Oklahoma at the age of 66. Mark spent his younger years in the Bradley area running up and down the Washita River and playing on the farm with his cousins. He graduated from Lindsay High School in 1971 where he excelled in athletics, earning All-State honors in both football and basketball and played in the Oklahoma-Texas Oil Bowl. He went on to play football at OSU. Mark felt very blessed to have been associated with the rank of outstanding coaches such as Jim Stanley, Bum Phillips, Joe Tunnell, Charles Heatly, and SJ Foster. Mark had many funny stories of summers spent working on the pipeline during high school and college. After college, he was employed by Wilson Foods and later became a truck driver and superintendent for Sun Oil until his retirement. On May 23, 1981, Mark married the love of his life, Tonya Hopkins. They had 38 wonderful, fun-filled adventures together. He was a constant encourager to Tonya and was a calm, guiding force to their boys. Mark loved the outdoors and was an avid hunter and fisherman. He spent many hours with loved ones at Lake Texoma. He was preceded in death by his parents, Tonya’s parents, Hop and Peet Hopkins; and brother-in-law Newt Elmore. Mr. Loman is survived by his loving wife, Tonya; their sons Noah Nikole Loman and Jacob Yates Loman; his sister, Loretta Elmore; his brother, Lynn Loman and wife, Janie; his brother-in-law and sister-in-law, Darrell and Niki Richardson; and a host of nieces, nephews, cousins, and great-nieces and great-nephew. Mark was loved by many and will be missed by all who knew him. Memorial services are scheduled for 1:00 p.m., Saturday, March 23, 2019 at the First United Methodist Church in Lindsay. Services are under the direction of Wooster Funeral Home. You may send a condolence to the family at www.woosterfuneralhomes.com.

Leslie Mark Loman was born January 6, 1953 in Chickasha, Oklahoma to Lloyd and Lucile (Selzer) Loman and passed away unexpectedly on Wednesday, March 20, 2019 in Shay, Oklahoma at the age of 66. Mark spent his younger years in the Bradley area... View Obituary & Service Information

The family of Mark Loman created this Life Tributes page to make it easy to share your memories.