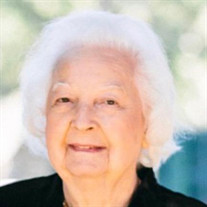 On Monday, June 25, 2018 Marilyn Wiley Blaker joined our Lord Jesus in Heaven. She was born Marilyn Margene Wiley to Mary Williams Wiley and Lynn Hayward Wiley on May 26, 1929 in Maud, OK. Marilyn had an amazing childhood filled with lots of grandparents, aunts, uncles and cousins plus two little brothers, James and Don. Marilyn graduated from the Elmore City (Oklahoma) high school in 3 years, barely 17 years old and soon began the summer session at the University of Oklahoma. Halfway through her fall semester, she left school to marry her high school sweetheart, Ray Cagle. The following September, Dan was born to the young couple. The next summer she had Michael, but being a preemie, baby Michael didn’t survive more than a few hours. Decades later, Marilyn would console new mothers who had lost their own babies. The year after Michael died, Ray was tragically killed in an oil field accident, leaving Marilyn to raise Dan alone. Being a widow at 19 with a toddler, Marilyn decided to return to school. With the help of family and friends, she enrolled in Odessa College in order to originally become a Lab Tech but with her excellent grades she decided to instead be a Medical Technologist. An outstanding student, Marilyn realized with a few more classes she could apply to medical school. She left for the University of Texas where she completed enough requirements to be accepted at Southwest Medical School in Dallas. Fate intervened as she had occasionally dated Dave Blaker while in Odessa. Dave convinced her that an MRS degree was better than an MD degree and the two were married in 1954. April was born two years later, and Dawn surprised everyone the next year. Marilyn was an entrepreneur, starting numerous successful businesses throughout the years. Not only had she worked in hospitals in her early career, but she started a business recruiting nurses due to the severe nursing shortage. She and Dave began their worldly travels finding nurses in Australia, Canada, South Africa and the Philippines who wanted to work in Texas. She began a travel agency which brought foreigners for unique one-of-a-kind Texas experiences. She planned European trips for others, many involving her numerous church friends. She and Dave travelled to the Soviet Union before American tourists were allowed, China, throughout Africa, Europe, North and South America. Marilyn attended the Memorial Church of Christ in Houston for 49 years. She loved her Christian life and was thrilled to share it with others. We estimate in her 50+years of teaching, she taught over 1,200 children, and hundreds of women in Ladies Bible Classes plus mentored many more. An amazing cook, one of her specialties was her homemade cinnamon rolls. (We’ll share her recipe!) She always had enough food for extras, and enjoyed opening her home to friends, family and strangers. She taught her children hospitality at an early age when they witnessed Marilyn and Dave getting foreign exchange college students during December to show them the true meaning of Christmas and experience a family holiday meal. Marilyn returned to school while in her 50s to complete her Bachelor’s Degree at Houston Baptist University with a double major in Religion and Psychology. Later she and Dave worked as lay chaplains at Texas Children’s Hospital and MD Anderson Hospital. She also volunteered at Lifeline Chaplaincy. Marilyn, also called Nani, is survived by her children, Dan, April and Dawn. Grandchildren include Melody, Jonathan, Anne, Kim, Rob, Ryan, Blake and Cole. Great-grandchildren are Jake, Jacie, Olivia, Nathan, Ginny Beth, Charlotte, Camden and another little one on the way. Her daughter and sons-in-law, Jimmie Carol, Robert and Doug held a special place in her heart as did her niece, Lainie. Many others were treated like her own and she loved you just as much as her kids. Marilyn was the calm in the storm, who fiercely loved her family and, even more, her Lord and Savior. Funeral services will be at Wooster’s Funeral Home in Pauls Valley Oklahoma at 2 pm on Friday, June29th with burial immediately following at the Foster, Oklahoma cemetery. A memorial service will be held later at the Memorial Church of Christ in Houston, Texas. In lieu of flowers, the family has requested donations be made to Lifeline Chaplaincy Compassionate Touch at Texas Medical Center, 1415 Southmore Blvd., Houston, TX 77004. You may send a condolence to the family at www.woosterfuneralhomes.com.

On Monday, June 25, 2018 Marilyn Wiley Blaker joined our Lord Jesus in Heaven. She was born Marilyn Margene Wiley to Mary Williams Wiley and Lynn Hayward Wiley on May 26, 1929 in Maud, OK. Marilyn had an amazing childhood filled with lots... View Obituary & Service Information

The family of Marilyn Wiley Blaker created this Life Tributes page to make it easy to share your memories.