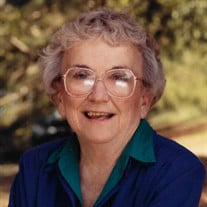 Margaret Huntley Shumate was born March 13, 1918, in Pauls Valley, Oklahoma. She was one of five children born to Carl A. and Margaret F. (Matthews) Shumate. Margaret departed this life for her eternal home on December 7, 2016, in Norman, Oklahoma, at the age of 98 years. Margaret graduated from Pauls Valley High School in 1935 and later attended college at Oklahoma A & M (OSU). It was during her first year of college that circumstances arose that required her to return home to Pauls Valley in order to help her mother through some difficult health issues. Due to her unwavering devotion to her family, she was willing to abandon her personal goals to move back into the family home at 301 S. Cherry Street. Margaret was always willing to put her needs aside to help friends and family. These circumstances helped Margaret grow into a very strong person who gave unselfishly and, more importantly, a person who possessed an enduring faith. Margaret worked for Pauls Valley National Bank for many years and was also employed by Tolbert’s Insurance Agency for some time. She later moved to Norman, Oklahoma, and worked at Bill Purcell Insurance agency and later served as a house mother for Chi Omega and Delta Gamma Sororities at the University of Oklahoma. Margaret loved being involved with the Business and Professional Women’s Club and she was honored to receive the "Woman of the Year" distinction. Margaret was a member of the Pauls Valley Methodist Church, McFarland Methodist Church, and the United Methodist Women. She attended faithfully as long as her health allowed. In 1994 Margaret met and fell in love with Alfred Brew. Even though they were only married for a short time before Al passed away, she always said he was the absolute "love of her life". Once again, in 2000, Margaret’s love of family and desire to be near them led her to return to Pauls Valley to be near her family and friends, especially with her sister, Julia. Margaret is preceded in death by: her parents, Carl and Margaret Shumate; her brothers: Joe Shumate, his wife Anna Lee; Bill Shumate; Carl Shumate; her sister Julia Sacra, her husband H.E. "Toots" Sacra. Also preceded by her niece Carol Worley; nephew Jay Shumate; Son-in-law Phil Lohmann; Grandson John Stine; step-grandson Jeff Lohmann; step-granddaughter Tammy Frazier. And her beloved husband Alfred Brew. Surviving family includes her daughter Julia (Judy) Elise Lohmann; Step-son Todd Brew; step-daughters Lerryn Clark and Holly Freeman; Granddaughter Sandy Brickman; Great-grandchildren Erin, Madison and Jordan Brickman; Libby Stine, Thompson Stine, Seba Green, step-great grandsons Alex Lohmann, Jay Frazier, and Colton Frazier; and great-great grandson John Green. Margaret is also survived by many loving nieces, nephews, cousins, and friends. A service to remember Margaret’s life is scheduled for 2:30p.m. Sunday, December 11, 2016, at Wooster Funeral home, 1601 S. Chickasaw, Pauls Valley Oklahoma. Memorials may be made to the First United Methodist Church of Pauls Valley, P. O. Box 385, 407 N. Willow, Pauls Valley, Oklahoma 73075. Condolences may be sent to the family at www.woosterfuneralhomes.com.

Margaret Huntley Shumate was born March 13, 1918, in Pauls Valley, Oklahoma. She was one of five children born to Carl A. and Margaret F. (Matthews) Shumate. Margaret departed this life for her eternal home on December 7, 2016, in Norman,... View Obituary & Service Information

The family of Margaret H. (Shumate) Brew created this Life Tributes page to make it easy to share your memories.