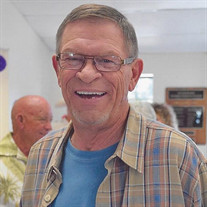 Lynn Wayne Moxley, 68, died on the evening of May 20, 2014 in the comfort of his home, surrounded by his family who loved him dearly. He died after a hard fought battle with cancer. Mr. Moxley was born in Wynnewood, Oklahoma on June 6, 1945. He was married June 12, 1964 to Mary Nelms, the mother of his children. He served in the Army Reserves 1965-1971, and also served as a volunteer Firefighter in Wynnewood 1968-1988. He met the love of his life, Priscilla, in 1994 and they married on November 6, 2006 in Eureka Springs, Arkansas. Mr. Moxley was a Car Salesman at Reynolds Ford in Norman for the past for 25 years. He was loved by all who had the gift of meeting him and he will be remembered most for his kind spirit, giving nature,infectious smile, and firm handshake. He was preceded in death by his parents, Lloyd and Leah Moxley. He was survived by his wife, Priscilla Ann Moxley; his son and daughter-in-law, Christopher Lynn Moxley and Laura Madeline Moxley of Norman; his daughter and son-in-law, Melissa Moxley Nation and Scott LendellNation of Pauls Valley; his brother, Lloyd Thornton Moxley of Ponca City; the mother of his children, Mary RollowNelms of Pauls Valley; his grandchildren: Morgen Rachelle Williams and her husband Gareth Trevor Williams of Norman, Christopher Jorden Moxley of Norman; Hunter Scott Nation, Austin Lane Nation, Gavin Lynn Nation, and Leah Nicole Nation of Pauls Valley; and his step-sons, Ronnie Robbins of Norman and Chad Robbins of Washington D.C. Visitation is scheduled for Thursday, May 22, 2014 from 9:00 a.m. – 2:00 p.m. at Havenbrook Funeral Home in Norman; 3-7 pm at Wooster Funeral Home in Pauls Valley; and also Friday, May 23, 2014 from 9:00 a.m. – 11:00 a.m. Funeral services are scheduled for Friday, May 23, 2014 at 1:00 p.m. at Higher Ground Church on Highway 19, half a mile west of I-35 in Pauls Valley, OK. Interment will be in the Oaklawn Cemetery in Wynnewood, OK. The family asks that in lieu of flowers, memorials may be made to Oklahoma Medical Research Foundation, 825 NE 13th, Oklahoma City, OK 73104-9930. Services are under the direction of Wooster Funeral Home. You may send the family a condolence at www.woosterfuneralhomes.com

Lynn Wayne Moxley, 68, died on the evening of May 20, 2014 in the comfort of his home, surrounded by his family who loved him dearly. He died after a hard fought battle with cancer. Mr. Moxley was born in Wynnewood, Oklahoma on June 6, 1945.... View Obituary & Service Information

The family of Lynn Wayne Moxley created this Life Tributes page to make it easy to share your memories.