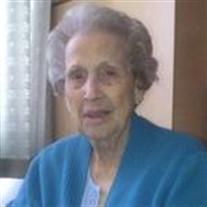 Ludia Jaunita Yoakum passed from this life March 26, 2015 at Good Samaritan Village, Loveland, CO at the age of 96. Ludia Morris was born February 14, 1919 at Pea Vine Creek, Oklahoma. When she was five years old she traveled with her family by covered wagon from Oklahoma to their new home in Hardy, Arkansas. They remained there a brief time and returned to Pauls Valley, OK by train. On July 23, 1938 she became the wife of Harold Yoakum and completed their family with a daughter, Gayle and a son, Harvey (Carol). They spent most of their years in the Oklahoma City area but lived in Longmont from 1976 to 1980 where Harold managed Yoakum Tire & Oil Company. Ludia enjoyed belonging to the Longmont Artist Guild and was pleased to discover that she possessed artistic talent. She was very active in Oklahoma City. She prepared many meals at the two Tastee Freeze drive-inns they owned in Del City, but being a homemaker was her first love and a multitude of friends and family enjoyed dining at her table. She volunteered at the Affair of the Heart events and enjoyed belonging to her Secret Sister Club. She was raised in the Baptist faith and was a member of the Del City First Southern Baptist Church and later the Southern Hills Baptist Church. She was preceded in death by her husband, Harold and her daughter, Gayle. Also five brothers, BJ, Hubert, Ernest, Emmitt and Ervin, and two sisters, Lora and Ann. She is survived by eight grandchildren who will miss her dearly, Kim Fajt, Jim Yoakum, Lisa Queen, Beth Becerra, Charlane Oswald, Rebecca Oswald, Carla Choate and Alan Oswald. Eight great grandchildren, Reid Grimes, Brooke Grimes, Josh Dahlem, Dalton Burns, Paul Choate, Joel Malecka, Lauryn Sargent and Zachary Choate. Six great great grandchildren, Gracie Dawn Dahlem, Ava Choate, Hadley Choate, Cleo Choate, Caden Choate and Tristin Choate. Vistitation will be at Howe Mortuary, Longmont, CO on Tuesday, March 31st from 4:00 PM to 7:00 PM. Funeral Services will be held at Wooster Funeral Home Chapel, Pauls Valley, Oklahoma on Friday, April 3, 2015 at 2:00 PM. Interment to follow services at Mt. Olivet Cemetery, Pauls Valley, OK. For memorials in Ludia’s honor, the family has designated the Pauls Valley Community Foundation, 509 West Paul, Pauls Valley, Oklahoma 73075. You may send a condolence to the family at www.woosterfuneralhomes.com

Ludia Jaunita Yoakum passed from this life March 26, 2015 at Good Samaritan Village, Loveland, CO at the age of 96. Ludia Morris was born February 14, 1919 at Pea Vine Creek, Oklahoma. When she was five years old she traveled with her family... View Obituary & Service Information

The family of Ludia Jaunita Yoakum created this Life Tributes page to make it easy to share your memories.