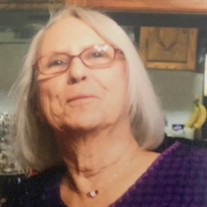 Lucretta Ann Shebester (Lou) was born on July 11, 1930 at the Murray family farm near Pauls Valley, Oklahoma. Her parents were Willie Mae Conner and Louis A. Murray. She was a spark of joy and had an indelible spirit that will continue on in those who had the pleasure to know her. Lou went to meet her heavenly Father on Oct. 28, 2021 surrounded by her adoring family. Lou fought a brave battle recovering from two broken hips in a little over a year, only to be diagnosed with cancer a few weeks later. She relied on her faith and her enduring love for her family to make the most of her final days on this earth. Lou married Danny Shebester on June 11, 1949 in Pauls Valley. Their 72 years of marriage was a celebrated highlight of their lives. In August, 1950 Lou gave birth to twin daughters, Trudy Jan and Judy Ann. Lou spent her entire life in Pauls Valley and she took great pride in living there. She knew practically every family in town and over the years would generally have a connection or a story about most of them! Even in her final days, she was excited to share stories about playing basketball for Pauls Valley High School, only to discover that the hospice worker, who was at her house, had an aunt on the same team in 1947. Lou’s life revolved around her family and her church. She was a lifelong member of the Church of Christ and served as both a Sunday School and Vacation Bible School Teacher. She always was willing to help others and always had a kind and happy word. Her church family brought her much love and support throughout her life. Lou stayed at home to care for Judy, before she started school, and supported Danny’s career in the oil ﬁeld. She had her own career as a Secretary for Farm Bureau and a successful Ladies’ ready-to-wear salesperson, and eventually helped manage the family oil business, LouDan Enterprises. Lou had a timeless sense of style. She always knew how to put a look together, from the bag to the shoes. She had a life-long passion for gardening and tending ﬂowers. Her flowers were spectacular due to her constant care. She would manage to keep her poinsettias and Easter lilies flowering and flourishing year round. She was an avid cook and baker. Countless friends have been blessed with her small loaves of banana bread that she would hand deliver in times of need. She spent many hours baking Italian cream cakes and German sweet Chocolate cakes at the request of her kids, and she could generally be found at the stove around 11:30 a.m. pan-frying vegetables for lunch. Lou loved to write letters and cards to keep in touch with family and friends. If you received one of her notes, then you know how she would carefully craft a letter with great penmanship, lots of underlining, and many exclamation points. Lou had many titles within the family that she built and to which she so lovingly tended. She was a doting mother to Judy, and then became Nanny Lou to Joe Dan and Kristin and Grand-Nanny Lou to Macie, Atticus, Eve, and Josephine. The greatest joy in her life were all of these children, in whom she instilled the value of family, faith, and education. She was at almost every football game, track meet, basketball game, and piano recital for three decades. Aunt Lou was very special to her nieces and nephews, and great nieces and nephews. She kept in contact with them and loved each of them dearly. She was the glue that held the Murray family together. Lou started her school career by walking four miles each way to the school house. She was grateful that she graduated from high school, and managed to accomplish that while working three jobs. She did not get the opportunity to go to college, but she ensured that her daughter and her grandchildren received college educations. Lou loved football and was a life-long fan of the University of Oklahoma football team. Watching her grandson, Joe Dan, play football at OU was one of the greatest joys of her life. BOOMER! She loved to travel and to visit her family, so much so that she flew all over the South, Midwest, and East Coast to visit her niece, grandson, and her granddaughter. She also enjoyed traveling with her sisters, with whom she had two of her most memorable trips to Hawaii and London. Lou was preceded in death by her parents, her inlaws, Albert and Leona Shebester, her infant daughter, Trudy Jan, her siblings, G.A. Murray and wife Joanne, Hardee Murray, Towana Rushing and husband Clyde, Eﬃe Mae Windle and husband, Joe, J.C. Choc Murray and wife Annabelle, brother-in-law Bill Shebester and sister-in-law Wanda Kilgariﬀ, nieces Amy Hafley, Mariah Murray, and Sheila Murray. Lou leaves behind her husband, Danny, daughter Judy and son-in-law Ron, grandchildren, Joe Dan Rogers, Hon. Kristin L. Garland and husband Nate, great-grandchildren, nieces, nephews, great nieces and great nephews. Before she passed, she said she would cry out in glory when she was reunited in heaven with Trudy and her sisters and brothers, and mother and father. Lou was a light in this world and a blessing to us all. There will be a celebration of her life at the chapel at Wooster Funeral Home, at 1:00 p.m., on Saturday, November 6th, 2021. In lieu of flowers, please consider a donation of time or a monetary donation to The Samaritans of Pauls Valley, Food Pantry located at 1000 N. Ash Street, Pauls Valley, Oklahoma, Phone: (405)207-9077.

Lucretta Ann Shebester (Lou) was born on July 11, 1930 at the Murray family farm near Pauls Valley, Oklahoma. Her parents were Willie Mae Conner and Louis A. Murray. She was a spark of joy and had an indelible spirit that will continue on... View Obituary & Service Information

The family of Lou Shebester created this Life Tributes page to make it easy to share your memories.