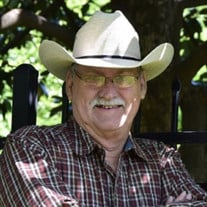 Lloyd Wayne Robbins was born to C.M. "Rob" Robbins, and C. Ruth Robbins on March 20, 1947, and passed from this life on November 2, 2021 in Pauls Valley, Oklahoma at the age of 74 years. . Lloyd explored many paths during his life. After graduating from Pauls Valley high school, Lloyd married his high school sweetheart, Gayle Dacus. Together they made their home in Houston, Texas and later Pauls Valley, Oklahoma. He went on to be an Oklahoma Highway patrolman, of which he was very proud. He also spent several years as a draftsman, then as a truck driver while living in Houston Texas. After moving with his family back to Pauls Valley, Lloyd spent the rest of his years working at the Garvin County Community Living Center. There he met several lifelong friends, both in the clients and the employees. After retirement, Lloyd further explored many of his artistic hobbies including, drawing, painting, photography, and what many of us consider his greatest skill, knife making. He also played the guitar, owning a beautiful Gibson, and passed down his love for music to his children. As a lifelong sportsman, he also passed down his love of hunting and fishing. Lloyd had a great understanding of guns, various game, and the tradition of being an honest sportsman. Lloyd's family was immersed in sports of every kind. From baseball, football, basketball, softball, cheer, and drill team, Lloyd himself, his children, his grandchildren, and even great grandchildren have continued the families athletic traditions. After Gayle’s passing in 2014, Lloyd was lucky enough to have had two loves in his life. Glenda, an old school friend, came into his life in 2015 and became inseparable companions. She took great care of him in his final days. Lloyd had a lot of life wisdom he was always more than willing to share. It was said he never met a stranger. Lloyd had a very close relationship with the Lord Jesus Christ that really came to fruition in his later years. He loved his church, he loved reading and discussing the Bible. It’s because of this his family does not mourn as those who have no hope, as the Bible says, so we celebrate a life lived in full. Lloyd ran his race faithfully and now he has received his reward. Mr. Robbins is survived by: Glenda Deaton Logan Daughters: Angela Brown and husband Shannon of Pauls Valley, Oklahoma Christi Robbins of Pauls Valley, Oklahoma Son: Justin Robbins and wife Angel of Ft. Worth, Texas Grandchildren: Chad Wayne Baker and wife Larryn; Kylee Crawford; Devin Baker; Kelsey Walsh and husband Jason; Hannan Robbins; Brad Brown; Breanna Rodriguez; Jordyn Rodriguez; Layla Reyes; and Sofia Reyes Great-grandchildren: Mason; Tanner; Kyle; Stryker; Scout; Baylor; Luca-Scott; Jayleigh; Peyton; Emma; and Lydia Nephews: Mike Fleming of Atlanta, Georgia and Mark Fleming of Houston, Texas Mr. Robbins was preceded in death by: Wife: Gayle Elizabeth Robbins on August 11, 2014 Son: Scott Wayne Robbins on August 3, 2010 Parents: Rob and Ruth Robbins Sister: Carolyn Peters Son-in-law: Kevin Baker Great-grandson: Creedyn Wayne Baker Funeral services are scheduled for 1:00 p.m., Monday, November 8, 2021, at the Crossroads Church in Pauls Valley, Oklahoma with Pastor Brock Carlile and Pastor Joel Downing officiating. Interment will be in the Mt. Olivet Cemetery under the direction of Wooster Funeral Home. You may send a condolence to the family at www.woosterfuneralhomes.com.

Lloyd Wayne Robbins was born to C.M. "Rob" Robbins, and C. Ruth Robbins on March 20, 1947, and passed from this life on November 2, 2021 in Pauls Valley, Oklahoma at the age of 74 years. . Lloyd explored many paths during his life. After... View Obituary & Service Information

The family of Lloyd Wayne Robbins created this Life Tributes page to make it easy to share your memories.