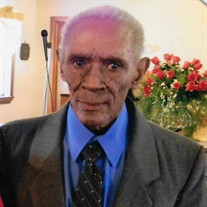 Lewis Thrash Sr. was born on September 14, 1924 in Tatums, Oklahoma to Willie and Sadie (Fulmer) Thrash. Lewis had two sisters Leslie and Vester. He had four brothers, Dubois, Nehemiah, William, and Charles all who proceeded him in death. Lewis accepted Christ at a young age and was baptized at Bethel Baptist Church. He was also a member of Pilgrim Baptist Church. Lewis attended school in Tatums and he was drafted into the Navy during World War II. He spent two years as a cook, he received two medals, Victory Medal and the Asiatic-Pacific Campaign medal, during his service from 1943-1946. Lewis returned home to Tatums, Oklahoma in 1946, to continue a course in auto mechanics. Lewis was a "Jack of All Trades," from electric to auto mechanics, he could do it all. Lewis met the love of his life Perfelthia Hooks and they were married on May 4, 1946. Lewis and Perfelthia were married for over 60 years until her death on September 19, 2006. To this union 8 children were born. They also had one child that was still born. Some of Lewis' favorite sayings were Together, Together, and Front and not behind. Preceding him in death were sons Reverend Reginald Thrash Sr. and Stanley Thrash and his great-great-grandson Zaylen Jones. He lives to cherish his memories. Children: Carolyn Breath - Tatums, Oklahoma Yvonne Thrash-Jones - Bogalusa, Louisiana Denise Hurley - Oklahoma City, Oklahoma Lewis Thrash Jr. (Sheila) - Tatums, Oklahoma Sylvia Williams - Oklahoma City, Oklahoma Pamela Williams (Patrick) - Oklahoma City, Oklahoma Niece: Evelyn Thrower (Eric) - Edmond, Oklahoma A host of grandchildren, great-grandchildren, great-great-grandchildren, nieces, and nephews, and friends. Graveside services are scheduled for 1:00 p.m., Friday, February 26, 2021 at Tatums Cemetery. Services are under the direction of Wooster Funeral Home. You may send a condolence to the family at www.woosterfuneralhomes.com.

Lewis Thrash Sr. was born on September 14, 1924 in Tatums, Oklahoma to Willie and Sadie (Fulmer) Thrash. Lewis had two sisters Leslie and Vester. He had four brothers, Dubois, Nehemiah, William, and Charles all who proceeded him in death.... View Obituary & Service Information

The family of Lewis Thrash Sr. created this Life Tributes page to make it easy to share your memories.