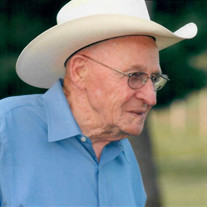 Leo Henry Langdon of Elmore City, Oklahoma was born to Henry Clay and Lula Alice (Robinson) Langdon on November 20, 1919 in Holdenville, Oklahoma and passed from this life on July 13, 2016 in Pauls Valley, Oklahoma at the age of 96 years. Leo grew up and attended school in Spaulding, Oklahoma. He served his country in the U. S. Navy during World War II. Leo then reenlisted in the U. S. Army Reserves and later the National Guard. Leo and Carneal Choate were married in Wewoka, Oklahoma in 1939. Together they made their home in Wewoka and later moved to Elmore City, Oklahoma in 1969 until her death in 2000. After Carneal’s passing, Leo married Venita Kennedy who also preceded him in death. Leo worked in the oil field as a production superintendent for Amoco for over thirty-three years until his retirement. He was a member of the Church of Christ and served as Elder for many years. In his spare time, he enjoyed playing golf, raising race quarter horses, and camping. The highlights of his life were his family and grandchildren. Mr. Langdon is survived by: Son: David Langdon and his wife Teresa of Elmore City, Oklahoma Daughter: Nita Kay Hogan and her husband Henry of Elmore City, Oklahoma 8 grandchildren, 20 great-grandchildren and 14 great-great-grandchildren A host of family, nieces, nephews and friends Mr. Langdon was preceded in death by: His wives: Carneal Langdon and Venita Langdon Parents: Henry and Alice Langdon 3 brothers: Elbert Langdon, Henry Clay Langdon, Jr., and Reece Langdon 1 sister: Elba Walton Funeral services are scheduled for 2:00 p.m., Friday, July 15, 2016 at the Church of Christ in Elmore City, Oklahoma with Joe Terrell officiating. Interment will be in the Elmore City Cemetery under the direction of Wooster Funeral Home. You may send a condolence to the family at www.woosterfuneralhomes.com.

Leo Henry Langdon of Elmore City, Oklahoma was born to Henry Clay and Lula Alice (Robinson) Langdon on November 20, 1919 in Holdenville, Oklahoma and passed from this life on July 13, 2016 in Pauls Valley, Oklahoma at the age of 96 years. Leo... View Obituary & Service Information

The family of Leo Henry Langdon created this Life Tributes page to make it easy to share your memories.