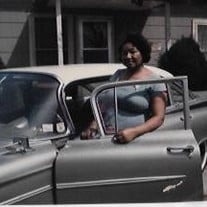 Lena Miles of Pauls Valley, Oklahoma was born to Lee and Frankie (Garrett) Baldwin on May 22, 1916 in Frost, Texas and passed from this life on April 29, 2014 in Pauls Valley, Oklahoma at the age of 97 years. Lena grew up and attended school at Dunbar and has been a lifetime resident of Pauls Valley. She was a member of Grant & Maple Street Church of Christ. In her spare time she enjoyed cooking, gardening, and growing flowers. The highlights of her life were her children, grandchildren, and family. Lena enjoyed entertaining her family and close friends. Her home was always open to anyone that she could help. Mrs. Miles leaves to cherish her memory: 2 sons: Major Lee Collins and wife Marie of Columbus, Georgia Frank Collins and wife Elisa of Baton Rouge, Louisiana 1 daughter: Shelia Vick of Pauls Valley, Oklahoma 1 sister: Emma Lou White Cuero, Texas 10 grandchildren, 20 great-grandchildren A host of nieces, nephews, family and friends Mrs. Miles was preceded in death by: Her husband: George Washington Miles Her parents: Lee and Frankie Baldwin 3 brothers: Edd Lee Baldwin, Rudolph King, and David King 4 sisters: Sally Baldwin, Ether Runnels, Willie V. Cox, and Ella B. Allen Funeral services are scheduled for 2:00 p.m. Monday, May 5, 2014 in the Wooster Funeral Home Chapel with Bro. Rick Martin officiating. Interment will be in the Bethlehem Cemetery under the direction of Wooster Funeral Home. You may send a condolence to the family at www.woosterfuneralhomes.com.

The family of Lena Miles created this Life Tributes page to make it easy to share your memories.

Lena Miles of Pauls Valley, Oklahoma was born to Lee and Frankie...