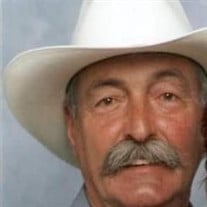 Lawrence Allison Hair April 4, 1947 - June 6, 2022 Lawrence Allison Rondo was born to Phillip Rondo and Sarah Elizabeth Crook in Columbus, Georgia. He and his mother resided in Phenix City, Alabama. At the age of 5, Lawrence was adopted by his step father, James Hair. As a child he traveled to Germany as a military dependent. Lawrence joined the Army when he was 17. He was stationed in Korea and Vietnam. While in Vietnam he served with the 11th Cavalry. When he returned to the US, he headed west, working a 20,000 acre ranch riding fence, trapping, and enjoying the solitude for two years. His love of horses led him to different race tracks, shoeing and hauling horses for Dwayne Lucas nd several others. At one time, he even ran a Pizza Hut in Hobbs, New Mexico, just to get by. There was nothing Lawrence wouldn’t try. In Austin,Texas, he worked as a medic in the emergency room, then he worked as a supervisor for a road construction company. From there he moved to Florida, where he worked road construction. Then he bought a fishing boat and ran crab traps in the Florida Keys. When he moved to western Arkansas, he drove a pulpwood truck and became owner of a convenience/feed store and grill. While in Arkansas he also raised calves. He was always a very hard worker. Times hit hard and he started back as a job superintendent at a construction site in Fayetteville, Arkansas. This was when his last great adventure began. He met his true love, Teo. They married and started raising English bulldogs. They moved to Wynnewood, Oklahoma in 2010. They bought some land and created Dirty Boot Farm. He took pride in the vegetables he grew in the 5 green houses. He lived there longer than anywhere else his entire life. Lawrence always wanted to teach kids about farming or chickens. He offered free chicks to any student, in return they had to show them in the county fair where he was poultry superintendent. He had students come to the farm to explain how green houses increased growing seasons. If you came to the farm you were sure to get a lesson about something. He leaves behind his heartbroken wife, Teo. His daughter Leeza Plemons and her husband Chris. Step daughters, Cristi Whiddon and husband Brad; Micki Carpenter and husband Terry; and Angie Henderson (that KID as he called her). Grandchildren Calli Hair and Cedar Plemons, all of his step grands he counted as his, Zayne Mounger, Jeromiah Henderson, Charlie Whiddon, Maggie Whiddon, Iva Carpenter and Laura Mae Goodrich. He has many brothers and sisters on both sides of the family and many nieces and nephews. Lawrence battled lung cancer for 4 years. The nurses at the cancer center at Mercy in Ada became his favorite people. The nurses with Cross Timbers were fantastic his final days. He also became close friends with his sister Karen's husband, Col. Steve Woolf. He taught Steve all about““ farmisizing”, that is to exercise at the farm by doing hard farm work. Lawrence was a person you had to get to know, if he would let you. His mother in law, the late Charlene Thurman, would say “Teo, he is an odd duck, but he is your duck.” He didn’t care for lazy people. He didn’t use foul language, he expected children to have good manners, and his prayer at the table until the day he died was “Thank you for our blessings” The Ol’ Cowboy will be missed! A memorial service to honor the life of Lawrence A. Hair is scheduled for 10:00 a.m. Saturday, June 18, 2022 at the Renewing Life Church 301 S.Moody Dr. Wynnewood,OK with Pastor James Robinson officiating. Condolences may be sent to the family @www.woosterfuneralhomes.com

Lawrence Allison Hair April 4, 1947 - June 6, 2022 Lawrence Allison Rondo was born to Phillip Rondo and Sarah Elizabeth Crook in Columbus, Georgia. He and his mother resided in Phenix City, Alabama. At the age of 5, Lawrence was adopted by... View Obituary & Service Information

The family of Lawrence Allison Hair created this Life Tributes page to make it easy to share your memories.