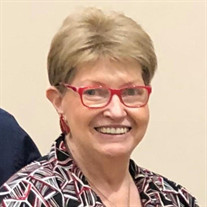 Iva Latricia Crawford of Elmore City, Oklahoma was born to John Clarence and Eileen (Workman) Mayberry on August 14, 1942 in Pascagoula, Mississippi and passed from this life on June 28, 2020 in Norman, Oklahoma at the age of 77 years. Latricia grew up in Elmore City and attended all 12 years of public school there, graduating in 1960. She later attended East Central University in Ada, Oklahoma. On March 29, 1969, Latricia married Joel Crawford in Elmore City, Oklahoma. She worked in banking for 30 years. In her spare time, Latricia enjoyed creative writing, including poems and stories about friends and family, along with arts and crafts. She was a member of the Foster OHCE. Her grandchildren were the joy of her life. Latricia was a devoted member of the Elmore City First Baptist Church. Her marriage and love of God were also her greatest joys. Latricia was a great encouragement to others, smiling even when not feeling well. She wanted those she knew to always feel loved. She will be missed. Mrs. Crawford is survived by: Husband: Joel Crawford of the home Daughter: Jodi Linn Holman and husband Brent of Edmond, Oklahoma Brother: Johnny Mayberry and wife Marilyn of Elmore City, Oklahoma Sisters: Charlena Harrel and husband Johnny of Foster, Oklahoma Sherry Horton and husband Bill of Sand Springs, Oklahoma Grandchildren: Ashlen Holman and Tanner Holman A host of nieces, nephews, family and friends. Mrs. Crawford was preceded in death by: Her parents: John and Eileen Mayberry Sister: Kay Holman Arrangements for cremation are under the direction of Wooster Funeral Home. A memorial service will be held at 1:00 p.m., Saturday, July 25, 2020 at the Elmore City First Baptist Church. The memorial service will be available for viewing by livestream thru the First Baptist Church facebook page. You may send a condolence to the family at www.woosterfuneralhomes.com. The family requests memorials be made to the Boys Ranch Town, 5100 E. 33rd St., Edmond, OK 73013.

Iva Latricia Crawford of Elmore City, Oklahoma was born to John Clarence and Eileen (Workman) Mayberry on August 14, 1942 in Pascagoula, Mississippi and passed from this life on June 28, 2020 in Norman, Oklahoma at the age of 77 years. Latricia... View Obituary & Service Information

The family of Latricia Crawford created this Life Tributes page to make it easy to share your memories.