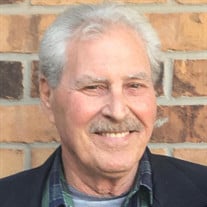 Larry Dale Robinson Sr. passed away on August 01, 2021 after a hard-fought battle with cancer. He was 76 years old. Larry was born on February 16, 1945 in Pauls Valley, OK to his beloved parents, Purt and Eula Robinson. He was born eighth of eleven children. After graduating from Wynnewood High School, he joined the United States Marine Corps. He fought for his country in the Vietnam war as a proud marine. He loved his country and living in Oklahoma. Larry enjoyed horse-back riding and working at the stables in Hawaii on the Air Force base after his military duty, giving horse-back riding tours and teaching children how to ride. He had his own horses on his acreage for the past 10 years after moving from the city. He was a history buff and spent much of his time watching Fox News. Politics was the only topic that he ever complained about, he was known as a positive person. But most of all, he loved his family and helping others, including the homeless. He always thought of others and was a selfless person. His smile was contagious, and he had a one-of-a kind sense of humor. He was very handsome and was often told that he looked like a movie star. Larry was also a good dancer and always had a good time at family gatherings making people laugh. He was great in business and very persuasive. He was always the top car salesman in his first career. He enjoyed his second career in the oil business until he retired. Larry was preceded in death by both parents, Purt and Eula Robinson; brothers, Billy Robinson, Ike Robinson, Jimmy Robinson, RP Robinson and sisters; Betty Mahorney, Shirley Scott; stepdaughter, Nikki Cain. He is survived by his spouse, Reanda Robinson; siblings, Phyllis Moore, Linda Morgan, Phillip Don Robinson Sr., and Mike Robinson; children/stepchildren, Purt Robinson, Sheila Hundley, Larry Robinson Jr., Cherie Robinson, Randall Shipman, Darlene Clark, Vickie Macias, and Bruce Dial; grandchildren/step grandchildren, Titus, Tyler, ShyAnn, Alexis, Timmy, Samuel, Gage, Purt, Ambrose, Trinity, Purtin, Ethan, Bobby, and Brandon. Services for Larry will be held at 2:00 P.M., Thursday, August 5 at Wooster Funeral Home, located at 1601 S. Chickasaw St, Pauls Valley, OK 73075. A viewing will be held on Wednesday, August 4 from 1 P.M.-7 P.M. He will be laid to rest at Oaklawn Cemetery, Wynnewood, OK.

Larry Dale Robinson Sr. passed away on August 01, 2021 after a hard-fought battle with cancer. He was 76 years old. Larry was born on February 16, 1945 in Pauls Valley, OK to his beloved parents, Purt and Eula Robinson. He was born eighth... View Obituary & Service Information

The family of Larry Dale Robinson Sr. created this Life Tributes page to make it easy to share your memories.