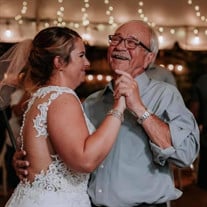 Dr. Larry Ralph Clipperton of Pauls Valley, OK entered this life as the son of Dean and Diane Clipperton on August 1, 1948 in Jefferson, Iowa and entered eternal life on Friday, June 4, 2021at his residence. In his death as in his life, he was surrounded by family who shared with him their abiding love, admiration, and appreciation for all he was to them. During his childhood days he liked to go to the Willow Creek bridge with his brothers and friends and fish off the bridge and camp. He ran the Sunday paper route with his sister. He raised and broke horses with his dad. Larry married Dathel Wimberly on April 8th of 1983 in Gainesville, Texas. He graduated from Bayard high school in Iowa in 1967. He went to Iowa State University and graduated from Palmer Chiropractic school in 1979. He entered the Army during the Vietnam War in 1968 where he received numerous medals and decorations, including Combat Infantryman badge, Purple Heart, and the Bronze Star. He was a squad leader in Company C, 2nd Battalion 8th Cavalry, 1st Cavalry Division He was a Chiropractor in Pauls Valley, OK for 40 years. He liked to spend time at the lake with his brother and sister-in-law riding on the boat, fishing, and dancing. He was a member of the Free Mason's Society. He was full of Panther Pride and was a big Pauls Valley Athletic Booster. He was a member of the Pauls Valley Men's Golf Association. He liked to hunt, fish, camping, play golf, and ride his motorcycle The highlights of Larry’s life were his family, going to Canada and motorcycles trips to Yellowstone and Sturgis. Larry taught others how to give and how to help, and put others first without wanting anything in return. Family who preceded him in death were wife, Dathel Clipperton, father, Dean Clipperton, daughter, Shannon Riddle, brother, Gary Clipperton, sisters, Jeri Fitzsimmons and Patty Clipperton, son, Ryan Clipperton and grandson, Cameron Millard. Family who will continue to cherish his memory include his son, Chad Clipperton and wife Amy, daughter Shaylea Beach and husband Charlie, Mother Diane Clipperton, brother Randy Clipperton and wife Sandy, sisters Karen Esslinger, Elaine Anderson, Deb Gustoff and husband Ronnie, Cindy Monthei and husband Randy. Of course Grandchildren Kenzey Clipperton, Creighton Clipperton, and Cannon Beach. Friends who will serve as Pallbearers for Dr. Larry Clipperton are: Tim Dennis, Dean Hill, Dale Dacus, John Sprowls, Bob Seely, Bobby Oller, and honorary bearer Lamon Stanley. Graveside services are scheduled for Monday June, 7th, 2021 at 1:00p.m. at The Pavillion in Mt. Olivet Cemetery in Pauls Valley, OK. You may send a condolence to the family at www.woosterfuneralhomes.com. Services are under the direction of Wooster Funeral Home.

Dr. Larry Ralph Clipperton of Pauls Valley, OK entered this life as the son of Dean and Diane Clipperton on August 1, 1948 in Jefferson, Iowa and entered eternal life on Friday, June 4, 2021at his residence. In his death as in his life, he... View Obituary & Service Information

The family of Dr. Larry Clipperton created this Life Tributes page to make it easy to share your memories.