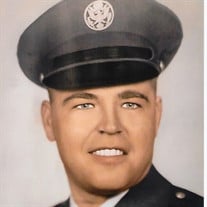 LA ‘Lucky” Brown of Pauls Valley, Oklahoma was born to Doyle and Hilda (Dunn) Brown on July 14, 1933 in Auburn, Arkansas and passed from this life on February 27, 2018 in Sulphur, Oklahoma at the age of 84 years. Mr. Brown grew up in Fort Smith, Arkansas. He won the state music championship as a teenager and participated in FFA. On January 14, 1963, LA married Claudia Tomberlin in Oklahoma City, Oklahoma. He served his country in the U. S. Air Force and worked as a T Sgt. Air Traffic Controller, retiring after 20 years of service. LA also worked in the oil field, owned a sporting goods store, was a pilot, truck driver and musician. He was a member of the Senior Citizens Club, FFA and American Legion. In his spare time he enjoyed music, flying, and football. The passions of his life were his beautiful family, wife, flying, performing music and football. The most important thing he taught others about life was to be a faithful servant to God, Country and family. Mr. Brown is survived by: His wife: Claudia of the home 4 sons: Jr. Brown and wife Shonda of Phlugerville, Texas Sonny Brown and wife Lela of Edmond, Oklahoma Jeff James and wife Margaret of Houston, Texas Lon Brown and wife Shirley of Houston, Texas 2 daughters: Jeanne McFarland of Birmingham, Alabama Debbie Brown of Waco, Texas 16 grandchildren and 16 great-grandchildren Mr. Brown was preceded in death by: His parents: Doyle and Hilda Brown Brother: BJ Brown Sister: Donna Memorial services are scheduled for 11:00 a.m. Saturday, March 10, 2018 at the Wooster Funeral Home Chapel with Rev. Dwayne Johnson officiating. Services are under the direction of Wooster Funeral Home. You may send a condolence to the family at www.woosterfuneralhomes.com.

The family of L A "Lucky" Brown created this Life Tributes page to make it easy to share your memories.