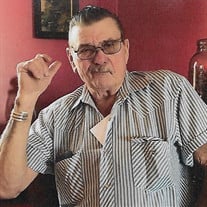 Kenneth Lee Russell, 75, passed away March 26, 2019 at Norman Regional Hospital after a long battle with cancer. Kenneth was born January 27, 1944 to Owen Earl and Kattie M. Russell in Paso Robles, California. Kenneth served in the United States Navy. He was stationed in San Diego, California then transferred to Bainbridge, Maryland. Kenneth served aboard the USS Bon Homme Richard. Ken had many jobs over the years, his most memorable was being a cowboy. He loved reminiscing about those days. Oh, the stories he could tell. He enjoyed going to re-enactments all over the United States. Ken loved making knives. He enjoyed bartering with anyone. He worked at O’Reilly’s in Pauls Valley, Oklahoma for 15 years. He retired in 2017. Ken loved spending time with family and friends along with his critters. Kenneth was preceded in death by his father, Owen Earl Russell and mother, Kattie M. Russell. Kenneth is survived by Shelley Russell, Maysville, Oklahoma Son: Johnny and wife Lou Russell of Ardmore, Oklahoma Daughter: Tracie and husband Kenneth “Mike” Worley of Chillicothe, Ohio Son: Bobby Russell of Chillicothe, Ohio Stepchildren: Sheree and Tyler Cox of Stonewall, Oklahoma Jennifer and Brad Bishop of Sulphur, Oklahoma Joshua and Kelsie Johnson of Maysville, Oklahoma John and Stephanie Williamson of Big Spring, Texas Brother: Earl J. and Phyllis Russell of Madill, Oklahoma Brother: Bill and Salorina Russell of Ardmore, Oklahoma Sister: Louise and Glenn Hayes of Freeport, Florida 13 grandchildren along with 3 great-grandchildren. Visitation will be from 4:00 p.m. – 6:00 p.m. on Friday, March 29, 2019 at Wooster Funeral Home in Elmore City, Oklahoma. You may send a condolence to the family at www.woosterfuneralhomes.com.

The family of Kenneth L. Russell created this Life Tributes page to make it easy to share your memories.