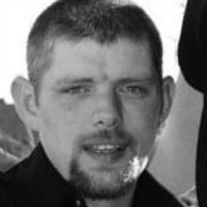 Kenneth James Hedgecoth (Bub) of Elmore City, Oklahoma was born to Donna Lee Cain and Gary Reynolds on June 7, 1982 in Exeter, California and passed from this life on March 15, 2021 in Elmore City, Oklahoma at the age of 38 years. Bub spent his early childhood years in Farmersville, California before moving to Oklahoma with his family in 1999. He enjoyed playing little league baseball as a little boy and grew up to play slow pitch softball as an adult. Bub was happiest when he was fishing in any river/lake/ditch/ or creek he could find. His other hobbies included noodling, hunting, shooting guns and spending most of his time doing outdoor activities. The love that he had for his friends and family never waivered, and his love was immeasurable even up to his final hours. Bub was a person who never took live too seriously. He had fun and made sure the ones that he surrounded himself with did also. The highlight of Bub’s life was the day he became a daddy to his baby girl Kenlee River Hedgecoth. She was his motivation to fight every day. Bub was preceded in death by his biological father Gary Reynolds, numerous great-grandparents, aunts, uncles, cousins, and friends. He is survived by his Daughter: Kenlee River Hedgecoth & family of Maysville, OK, Parents: Donna and Michael Barbee of Elmore City, OK, Step-Father: Dennis Hedgecoth of California, Siblings: Dennis (Shorty) Hedgecoth of Wynnewood, OK, Matthew Hedgecoth of Texas, James Hedgecoth of California, Mercedes Hedgecoth of California, Jerry Reynolds of California, James Reynolds of California, Carrie Lowe of California, Grandparents: Kenny and Margie Cain of the home in Elmore City, OK, Millie Willis of California, Joan Howard of California, and a host of aunts, uncles, cousins, nieces, nephews and friends who loved him dearly. Those serving as Pallbearers will be Dennis (Shorty) Hedgecoth, Michael Barbee, Robert Cain, Jimmy Brown, Austin Brown, and Andrew Cain Honorary Pallbearers: Travis James (TJ) Hedgecoth, Lucas Cain, Kaden Keck, Rhyder Edgar, and Rylan Beverly Funeral services are scheduled for 2:00 p.m., Thursday, March 18, 2021 at the Elmore City Cemetery under the direction of Wooster Funeral Home. You may send a condolence to the family at www.woosterfuneralhomes.com.

The family of Kenneth Hedgecoth created this Life Tributes page to make it easy to share your memories.