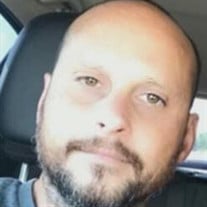 Justin Devon Eckert, 38, sadly passed away August 26, 2021 after an unexpected heart attack. Justin was born December 29, 1982 to Jeff Ikerman and Brenda Blakely in Tulare, California. He attended and graduated from Pauls Valley High School in 2001. He later attended UTI in California, and graduated in 2006. Justin had many jobs over the years, but had currently been working for Harrah Disposal. When he wasn’t working, he spent his time doing many things, such as being around the ones he loved. Justin was always fixing anything and everything. He was a man of many trades. He loved to joke around, play games, and help others. He also enjoyed listening to music, which he considered the louder the better. Justin was hard-working, compassionate, funny, and had a never give up attitude. Justin was preceded in death by his grandparents Robert and Mickey Eckert, daughter’s mother, Kelly Hitt Best, friend, Kyle Wilkerson, and Hondo his favorite dog. Justin is survived by mother, Brenda Blakely, father and stepmother, Jeff and Wendi Ikerman, daughter, Laney Hitt, brothers, Jason Eckert, Robert Jeremy Nelson, Aaron and Cody Ikerman, sisters, Amanda Baird, MacKenzie and Tiffany Ikerman, aunt, Leslie Alexander, cousin, Shannon Alexander, many nieces and nephews, and companion, Meriel Wheeler. Justin’s services were held Tuesday, September 7, 2021 in the Wooster Funeral Home Chapel in Pauls Valley at 11:00 a.m.

The family of Justin Devon Eckert created this Life Tributes page to make it easy to share your memories.