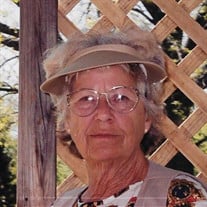 Joyce (Turner) Wade passed from this life on Tuesday, March 24th 2015. Before her lengthy illness, she was a light hearted, fun loving, most gracious giving woman. She was a daughter, sister, a wife, a mother, a grandmother, a great grandmother and a friend. She was the daughter of Slim and Bessie Turner. She grew up with 1 sister and 8 brothers and attended Satterwhite School House until the 8th grade. She then went on to work the fields picking cotton and cutting broomcorn and helping the family with whatever they were doing. They raised, butchered and smoked their own meet, canned their own food and made their own clothes. She married and had a son who developed leukemia and he died at the age of 3. She went on to have a son & 2 daughters with Alonzo. They were married 61 years and she was truly blessed with a husband who took care of her when she could no longer do for herself and a daughter that lived close enough and understood her without her having to say much at all. They raised 1 son and 2 daughters which gave her 8 grandchildren and 11 great grandchildren. She loved her family and friends and she loved to have fun! Her smile and laughter was so contagious and she always found the best in people. She would yell “there’s a sign” every time it was garage sale season and we might drive for miles looking for it! She also enjoyed catching more fish than Alonzo! She didn’t care to eat fish (we always said good, that’s more for me to eat!). She enjoyed her days and nights with the Girl Scouts and never wanted them to end. Her daughter Diane was a troop leader for many years and she would attend every event she could go to. She was an Honorary Girl Scout and they all called her Grandma. Penny loved her Grandma and was so fortunate to have her living so close to her. She was able to see her almost every day until she grew up. She loved playing with kids, playing games, singing, reading out loud to the little ones. She even played with Gerry’s kids until she couldn’t physically do it anymore. She loved her sewing club friends and she always loved to sew and really loved to teach someone to sew. She was blessed to have a niece who makes quilts that moved back from Pennsylvania and joined the club. She would say “It took on a whole new outlook because Punkin is so talented” and indeed her niece Mary Lou Parshal is gifted with an artistic eye and a talent for sewing. She was blessed with having the First United Methodist Church family and enjoyed going to events they would go to as a group. She was involved with anything they needed volunteers for until she first came down sick. Some of her church friends have preceded her in death and she is now in heaven with them. She was preceded in death by both sons, Billy Gene and Bobby Allen Wade and his grandson Pablo. Her parents and siblings, Mary Ann Kinard, Lloyd, Cecil, and Jimmy Turner. She is survived by her husband Alonzo Wade, Daughter Diane with Tem McKee and granddaughter Penny and Coby Davis and 2 great grandsons, Tristan and Tucker. Daughter Gerry with Don Wilson and grandchildren, Daniel, Matthew, Sarah and Joshua. Her grandchildren from Bobby are Carissa with John Hunter and 4 great grandkids Destiny McLean, Adrianna McLean, Michael and Damion Hunter. Bobby with Andrea Wade and 3 great grandchildren, Dayton, Edie and Talon. And Melissa Wade with 4 great grandkids, and a larger number of Turner and Wade family and friends. We have been blessed with knowing her and having her in our lives. The family would like to thank all who have sent food, paper goods, flowers, etc…. and done all the little extra’s that make these days ahead of us a little easier. She will be missed by a lot of people because she touched so many lives and always wanted to tell them Thank You for being a part of her life. Thank you from all of her family, we had a great journey with her and now it has come to an end with us and a new one has just begun.

Joyce (Turner) Wade passed from this life on Tuesday, March 24th 2015. Before her lengthy illness, she was a light hearted, fun loving, most gracious giving woman. She was a daughter, sister, a wife, a mother, a grandmother, a great grandmother... View Obituary & Service Information

The family of Joyce Marie Wade created this Life Tributes page to make it easy to share your memories.