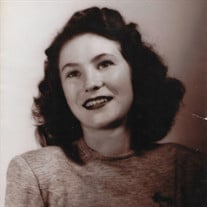 Johnanna “Johnnie” Mitchell of Pauls Valley, Oklahoma was born to Walter B. “Bud” Fisher and Jettie Mae Smart Fisher on November 24, 1929, in Oklahoma City, Oklahoma and passed from this earthly life at the age of 86 years on May 1, 2016, surrounded by her daughters, in Sulphur, Oklahoma. Because of her Daddy’s work in the oilfields in the 1930s and 1940s, Johnnie attended many different schools during her childhood, sometimes 2-3 different schools each year. When the family settled in the Konawa area, she attended school at Vanoss school and graduated from Konawa High School where she participated in the Drama Club. Her plans after graduation were to attend Draughon’s Business School in Oklahoma City, but that all changed when she met her future husband, Tommy Mitchell, while she worked at the Bayless Drug Store in Konawa. She and Tommy were married on December 7, 1947 in Ada, Oklahoma. They moved to Pauls Valley in 1955 when Tommy had the opportunity for a promotion with the Carter Oil Company (eventually becoming Exxon Mobil). At the time of her death, Johnnie was proud that she continued to live in the home they had purchased in 1955.Together, Johnnie and Tommy raised their three daughters Johnna, Marianna, and Ginny in that home. They enjoyed 42 years of marriage before Tommy passed away in 1989. Johnnie was a stay at home Mom until Ginny reached school age when she began working as a secretary. She worked as a secretary for the Wholesale Liquor Office, Wacker’s General Office, and ended her career at the Pauls Valley General Hospital. She loved her family and enjoyed family get-togethers at her house for the holidays where there was always food aplenty. She was known as an excellent cook, especially her Chicken and Dumplings, Wacky Cake, Pumpkin Bread and last but not least, her fudge. She passed on her cooking skills to her daughters, grandchildren and great grandchildren. She loved to travel and maintained a library of picture albums documenting all her trips. She loved sharing her memory books with anyone that took the time to lend a willing ear and listen to her stories. Johnnie also cherished her friends and her time spent with them. Survivors Include: Daughters: Johnna Bearden (Woody), Marianna (Mari) Burnett, and Ginny Brown (Greg) Grandchildren: Genifer Burnell, Jayme Burnett, Andra Weatherford, Tommy Ladd and Sarah Burnett Great Grandchildren: Nicole Weatherford, McKelvie Weatherford, Lauren Patchell, Aaron Patchell, Emily Evans, Aubrey Brown, Anna Brown, Tyler Wilkins, Lindsey Wilkins, and Tucker Burnell Brother: Charles Fisher and wife Audie of Stratford, Oklahoma Special Friend: Danny Johnson Preceded in Death by: Parents: Bud and Jettie Fisher, Stratford Mother-in-Law: Elpha “Pitchell” Mitchell, Konawa Husband: Tommy Mitchell Grandson: Mitchell Bearden The family would like to express their appreciation to Dr. Teresa Lynn and the staff at the Arbuckle Memorial Hospital, particularly nurses Richell and Jessica, for their tireless care, compassion and kindness given to our Mom in her last days, helping her leave this world with dignity. At her request, a graveside service will be conducted at 2:00 p.m., Thursday, May 5, 2016 at the Mt. Olivet Cemetery in Pauls Valley, Oklahoma with Brandon Henry officiating. Services are under the direction of Wooster Funeral Home. The family will receive friends at the funeral home on Wednesday, May 4th from 5:00 p.m. to 7:00 p.m. Memorials may be made to Murray County Health Care Foundation; P.O. Box 1138, Sulphur, Ok 73086

The family of Johnanna Mitchell created this Life Tributes page to make it easy to share your memories.