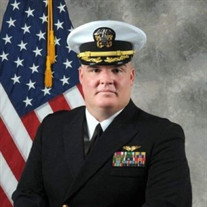 CDR John Maurice McKeon Jr. of St. Louis, MO, passed away Thursday May 26th, 2022, at the age of 51. He was the loving husband of Tawni B. McKeon, beloved son of the late John M. McKeon Sr. and Nancy McKeon, devoted father of James Hunter, Cadi Revill, son-in-law Logan Revill, and Emma McKeon, dear brother of Christine Martin, precious uncle of Brianna Martin, and soon-to-be grandfather of Baby Revill. After graduating as an Engineer from the United States Naval Academy in 1993, John proudly served in the US Navy for nearly 26 years. After receiving his “Wings of Gold” as a Naval Flight Officer, he completed numerous tours as an Airborne Communication Officer and Mission Commander while assigned to the TACAMO (Take Charge and Move Out) community at Tinker Air Force Base located in Oklahoma City, OK; where he “stood the alert” and flew countless missions aboard the US Navy’s E-6B nuclear deterrence aircraft. John completed two other notable operational sea tours; his first aboard the USS Abraham Lincoln (CVN-72) as a Catapult and Arresting Gear Officer, his second was aboard the USS Dwight D. Eisenhower (CVN-69) as the “Gun Boss”. His additional assignments included Navigator Instructor duties at Randolph Air Force Base in San Antonio, TX; and his last assignment was with the National Geospatial-Intelligence Agency (NGA) in St Louis, MO, where he continued to work as a federal employee after his retirement from the United States Navy in 2019. John received numerous military decorations, medals, and honors, including the Defense Meritorious Service Medal, two Meritorious Service Medals, both the US Air Force and two Navy & Marine Corps Commendation Medals, both the Global War on Terrorism Expeditionary and Service Medals among many others. John was a lifelong learner and received two graduate degrees, his first in Engineering Systems Management, his second in National Security, both from the US Naval War College in Newport, RI. Until his passing, he continued to volunteer as a recruiter for the US Naval Academy. Outside of the Navy, spending time with family was John’s favorite pastime. He loved going to rock concerts, Mecum car shows, St. Louis Cardinals games, visiting the lake, and so much more. He enjoyed any chance to be with his family on road trips, at big family celebrations, and at home for quiet nights cooking for everyone and anyone. His dogs, Chewie, Junie, and the recently departed Boudreau, were some of his dearest companions and joined him on many road trips. John loved and was loved by all who knew him and will be sorely missed by family, friends, coworkers, and military colleagues. Memorial contributions may be made in John’s name to the American Lung Association, the Naval Academy Foundation or Operation Family Fund @ www.operationfamilyfunds.org. Go Navy! Graveside military honor services for Mr. McKeon are scheduled for Wednesday, June 15, 2022 at 11:00 a.m. in the Hillside Cemetery in Purcell, OK under the direction of Wooster Funeral Home. Visitation is scheduled for 1:00 a.m. to 5:00 p.m. Tuesday afternoon June14, 2022 at Wooster Funeral Home in Pauls Valley, OK. Condolences may be sent to the family at www.woosterfuneralhomes.com

CDR John Maurice McKeon Jr. of St. Louis, MO, passed away Thursday May 26th, 2022, at the age of 51. He was the loving husband of Tawni B. McKeon, beloved son of the late John M. McKeon Sr. and Nancy McKeon, devoted father of James Hunter, Cadi... View Obituary & Service Information

The family of CDR John Maurice McKeon Jr. created this Life Tributes page to make it easy to share your memories.