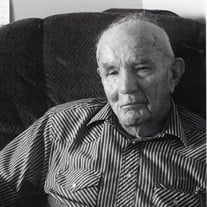 John Archer Jones was born in Whitefield, Oklahoma to Chester R. Jones and Eleanor A. (Deese) Jones on 1 November 1922. He passed on from this life on 21 February 2020 in Pauls Valley, Oklahoma at the age of 97. He grew up in Nicut, Oklahoma where the family ran a general store. After graduating from Muldrow High School he worked in Oregon, California, and Washington before joining the U.S. Navy at the advent of WWII. He served mostly in the South Pacific and attained the rank of Boatswain’s Mate 2nd Class Petty Officer. As part of the “Greatest Generation” he was in the flotilla to invade Japan if the atomic bomb did not end the war. He also served commanding a gun crew defending Liberty Ships as part of the U.S. Navy Armed Guard. He married Flossie (Hogner) Worley of Stilwell in 1948 and lived in Nicut and Akins before retiring to Sallisaw. He was a rancher, raised thousands of free range turkeys, worked for the State Forestry Division and had the most diverse general store/laundry/feed store/service station you could find anywhere. His love of gardening followed him all his life, even to the nursing home. He had a love of genealogy and history, especially studying the Civil War and about the south. He had a treasure trove of Sequoyah County history stored in his brain. His love of reading , especially newspapers was passed on to his sons and I am sure the demise of the daily print newspaper added to his passing. The highlight of John and Flossie’s lives was seeing their three sons complete college post graduate doctorial programs. Mr. Jones is survived by: Two sons: Charles Kim Jones, M.D. and wife Susan J. Jones, D.O. of Pauls Valley, Oklahoma Terry Gene Jones, M.D. and wife Lorraine of Winfield, Kansas Daughter-in-law Mary Jones of Tahlequah, Oklahoma. 10 grandchildren and 9 great-grandchildren. Mr. Jones was preceded in death by his parents: Chester R and Eleanor Jones. His wife Flossie, and his oldest son Chester Randall Jones, J.D. Family and friends will gather on Wednesday, February 26, from 5:00 p.m. – 7:00 p.m. at Wooster Funeral Home for a time of visitation. Funeral services are scheduled for Thursday, February 27, 2020 at 11:00 AM at Akins Baptist Church in Akins, Oklahoma with Reverend Vernon R. Smith officiating. Interment will be in the Akins Cemetery under the direction of Wooster Funeral Home of Pauls Valley, Oklahoma. Memorial Donations may be made to Akins Baptist Church or to PAWS animal shelter in Pauls Valley. ( Pauls Valley Animal Welfare Society). You may send condolence to the family at www.woosterfuneralhomes.com

John Archer Jones was born in Whitefield, Oklahoma to Chester R. Jones and Eleanor A. (Deese) Jones on 1 November 1922. He passed on from this life on 21 February 2020 in Pauls Valley, Oklahoma at the age of 97. He grew up in Nicut, Oklahoma... View Obituary & Service Information

The family of John Archer Jones created this Life Tributes page to make it easy to share your memories.

John Archer Jones was born in Whitefield, Oklahoma to Chester...