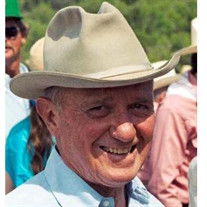 John Howard Burns was born December 12, 1913 to Arthur and Susette Matthews Burns in Pauls Valley, Oklahoma, and died on May 6, 2017 at his home in Pauls Valley. John grew up in Pauls Valley helping in his father's hardware and farming business, and spending summers working at his family's ranch near Albany, Texas. John graduated from Pauls Valley High School, attended Dennison University, and completed his degree in government at the University of Oklahoma. He was a member of Sigma Nu fraternity. Shortly after graduation, he worked in the Washington office of Senator Mike Monroney, then entered the United States Foreign Service. During a thirty year career, he served in posts around the world, including appointments as ambassador to the Central African Republic and Tanzania. He retired as Director General of the Foreign Service. Following his retirement in 1971, John enjoyed many happy decades pursuing his wide and varied interests. In 1979, he was inducted into the Oklahoma Hall of Fame. That same year he and other members of his family established Tio's Mexican Restaurant in Pauls Valley. A great lover of nature, some of his favorite trips were hiking, rafting, and wilderness camping. He visited every National Park. John had a lifelong affection for the family ranch and during his retirement spent a significant amount of his time there enjoying his large, extended family. He was blessed with good health which allowed him to live comfortably in his home during his final years. Preceding John in death were his parents, two sisters; Susanne Burns Payne and husband Dr. Warren Payne, Betty Burns Densmore and husband Chauncey Densmore. He is survived by his nieces Susan Payne Wilson, Sarah Payne Johnston, Marsha Densmore, and his nephew, Arthur Burns Densmore, and many close great nieces, nephews and cousins. Graveside services are scheduled for 2:00 p.m. Thursday, May 11, 2017 at Mt. Olivet Cemetery with Rev. Pam Normile officiating. Services are under the direction of Wooster Funeral Home. You may send a condolence to the family at www.woosterfuneralhomes.com

John Howard Burns was born December 12, 1913 to Arthur and Susette Matthews Burns in Pauls Valley, Oklahoma, and died on May 6, 2017 at his home in Pauls Valley. John grew up in Pauls Valley helping in his father's hardware and farming business,... View Obituary & Service Information

The family of John Howard Burns created this Life Tributes page to make it easy to share your memories.