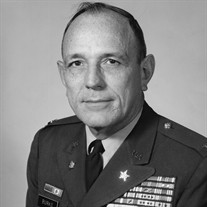 BURKS, John Royden, Colonel, U.S. Army (Retired), Pauls Valley, Ok., (94), passed away on November 2, 2017 in Pauls Valley, Oklahoma. His parents were Royden Elliott and Dulce Cecile (Harper) Burks. He was born on January 27th, 1923 in Tulsa, Oklahoma. One of Oklahoma’s most decorated combat veterans, Burks completed combat tours in WWII, Korea and Vietnam, during his over 30 years of military service. From enlistment as a Private in 1942 to retirement as a Regular Army Colonel in 1976, Burks served in successive positions of responsibility in both staff and command. Among his many awards and decorations, he was three times awarded the Legion of Merit. He flew forty missions as a gunner on B-24’s in the Pacific in WWII and was awarded the Distinguished Flying Cross and seven awards of the Air Medal. During the Korean and Vietnam wars, he was awarded four additional Air Medals, the Bronze Star, The Joint Services Commendation Medal, Three awards of the Army Commendation Medal and the Army General Staff Identification Badge for Pentagon service between the wars and the Vietnamese Honor Medal for distinguished service in the Republic of Vietnam. Additionally, while serving as The Army Senior Advisor to the State of Oklahoma during the Boren administration, he was awarded the Oklahoma Distinguished Service Medal. Colonel Burks was recognized by his peers at Fort Sill and placed in the Field Artillery Hall of Fame in 1972. Colonel Burks participated in twelve major campaigns, earning twelve battle stars for his combat involvement during three wars. Burks met and married his beloved wife, Rose Marie in 1949 upon graduation from Officer Candidate School in Fort Riley, Kansas. Rose preceded him in death on October 31, 2007. She was his mainstay and inspiration throughout his many challenging assignments. Their four children, daughter Alexa Marie and husband R. Benton Maples, Dumas, TX, Judy Lynn and husband Gary K. Sisney, Winsor, CO, daughter, Liess Ann "Sam" and husband Mike Anderson of Oklahoma City, son, John Royden, Jr., and wife Lisa Marie of Pauls Valley, OK, 11 grandchildren and 13 great-grandchildren survive. In the period following his retirement, Burks returned to Garvin County to serve in a wide variety of community positions of responsibility; as President of the Pauls Valley Kiwanis Club, President of the Pauls Valley Chamber of Commerce, Vice President of First National Bank, President of the Pauls Valley Industrial Development Association, Chairman of the Pauls Valley Industrial Development Corporation, Chairman of the Pauls Valley Planning and Zoning Commission, Chairman of the Pauls Valley Airport Authority, President of the Pauls Valley United Fund and Senior Warden of St. Timothy’s Episcopal Church. A celebration of his life will be held 2:00 p.m., Tuesday, November 7, 2017 at the First Presbyterian Church in Pauls Valley, Oklahoma. Interment with full Honors will be in the Arlington National Cemetery in Arlington, Virginia on February 8, 2018 at 3:00 p.m. Services are under the direction of Wooster Funeral Home. You may send a condolence to the family at www.woosterfuneralhomes.com. He loved his country and his family. In lieu of flowers, the family requests memorials be made to the charity of their choice.

The family of Col. John Royden Burks created this Life Tributes page to make it easy to share your memories.