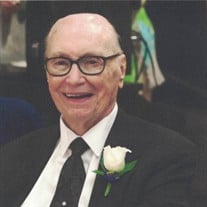 John B. Ballard, 100, of Oklahoma City, Oklahoma, passed away on Tuesday, March 15, 2022, at his home with family there with him. John was born July 28, 1921, in Pauls Valley Oklahoma to Carl V. Ballard and Mary E. Ballard, the 3rd of four brothers (Carl V. Ballard, Jr., Henry M. Ballard, and Charles S. Ballard). He was a lifelong resident of Pauls Valley. He graduated from PVHS in 1940. During that time, he played football, basketball and was on the wrestling team. He also participated in school plays, both acting and singing. He competed in several Interscholastic Singing Contests performing Baritone Solos and earned Superior ratings. After graduation, he attended OCU on a football scholarship. In the Spring of 1941, he injured his leg in practice. He left school to work in an airplane factory in San Diego and was there when Japan attacked Pearl Harbor. He later joined the Army Air Corp and reached the rank of 1st Lt. bomber pilot from 1942-1948. He ultimately was stationed in Korea and Japan from 1946-1948. In Japan, he met and married Dorothy Rose (Bonnie) Bonsall, from Port Arthur, Texas. She was a 1st Lt in the Army Nurse Corp. They returned to PV in 1948 and he went to work in his father’s grocery store. In 1951, he bought a Dairy Queen in PV, and his passion began. Within several years, he also built Dairy Kings in Purcell, Davis and Lindsay. After the death of Bonnie in January 1966, he married Ouida Taylor in 1970. In 1974, he closed the DQ in town and moved out by I-35 and opened Ballard’s Drive-In. He operated it until late July 2012, still working at the age of 91 at which time he retired after 61 years in business. In February 2013, Ouida died. A few years later, he met and subsequently married Laveda Kelly at which time he moved to OKC. Throughout his years, he met and made many, many new friends as they stopped by the Drive-In and got to know him personally, not just as customers. He will be missed. John was preceded in death by his parents and brothers, his wife, Bonnie, and his wife, Ouida. Survivors include his wife, Laveda; son, Johnny Ballard and his wife, Joanne; grandchildren, Stephanie Gourley and her husband, J.J. Gourley; Trip Ballard and his wife, Natasha Ballard; Jordan Kate Ballard; great-grandchildren, Jordan Young, Gavin Young, Joe Gourley, Gwyneth Gourley and Katerina Ballard. The family wants to express our gratitude to the staff at Excell Home Care & Hospice for their compassionate & loving care of John in the last stages of his life. Funeral services for Mr. Ballard are scheduled for 1:00 p.m. Monday, March 28, 2022 at the Wooster Funeral Home Chapel with Pastor James Robinson officiating. Interment with military honors will follow in Mt. Olivet Cemetery under the direction of Wooster Funeral Home. You may send condolences to the family @www.woosterfuneralhomes.com In lieu of flowers, the family request that any donations be made to: V4CR (Veterans for Child Rescue) Go to: www.vets4childrescue.org or Make your Check & Mail to: Veterans for Child Rescue, Inc. 7320 N. La Cholla Blvd. Suite 154-302 Tucson, AZ 85741

John B. Ballard, 100, of Oklahoma City, Oklahoma, passed away on Tuesday, March 15, 2022, at his home with family there with him. John was born July 28, 1921, in Pauls Valley Oklahoma to Carl V. Ballard and Mary E. Ballard, the... View Obituary & Service Information

The family of John Baxter Ballard created this Life Tributes page to make it easy to share your memories.