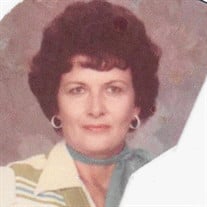 JOCEIL SMITH Joceil Smith, 82 was born on September 17, 1934 south of Elmore City, Oklahoma to Archie and Velma Dotson. She passed this life in Pauls Valley on August 16, 2017. Joceil grew up in the Satterwhite and Elmore City communities under the care of Archie and Polly Dotson, where she enjoyed riding horses and playing basketball and softball. She also loved to dance. Joceil married Tommy Edward Smith and to the union of which four children were born. Joceil was a talented painter and gifted artist who created many beautiful paintings of the nature that she so loved. No one could enjoy the wonder and beauty of trees, flowers, mountains, and waterscapes anymore than she. Joceil married Leon Irving Smith on November 2, 1979. They lived primarily in the Garvin County area prior to moving to the Lake Texoma area where she loved the lake and people. She was a very colorful strong-willed loving lady. Joceil is survived by her husband, Leon of the Kingston, Oklahoma area, her daughter, Connie Rogers (Roy) of Wynnewood, Oklahoma as well as two sons: Tommy Randall Smith and Sterling Smith and wife Betty all of Wynnewood, Oklahoma. Joceil is also survived by eleven grandchildren and many great-grandchildren and great-great-grandchildren. Also survived by her brother, Lewis Dotson and wife Ella Wayne of Elmore City, sister and brother-in-law: Portia Little of Shawnee, Oklahoma; Ruth and Ray Farris of Hurst, Texas. Joceil was preceded in death by her parents, Una Velma (Shanks) Dotson Rinehart ,Archie Franklin and Polly Dotson; husband, Tommy Edward Smith, brothers: Leroy Dotson and Don Rinehart; son: Ricky Edward Smith in 2009, and granddaughter, Amanda Smith in 1995; daughter-in-law; Cathy Smith in 2012. Funeral services are scheduled for Monday, August 21, 2017 at 10:00 a.m. in the Wooster Funeral Home Chapel. Interment will be in the Oaklawn Cemetery in Wynnewood, Oklahoma under the direction of Wooster Funeral Home. In honor of Joceil’s life attendees are encouraged to dress in bright colors. You may send a condolence to the family at www.woosterfuneralhomes.com.

JOCEIL SMITH Joceil Smith, 82 was born on September 17, 1934 south of Elmore City, Oklahoma to Archie and Velma Dotson. She passed this life in Pauls Valley on August 16, 2017. Joceil grew up in the Satterwhite and Elmore City communities under... View Obituary & Service Information

The family of Joceil Smith created this Life Tributes page to make it easy to share your memories.