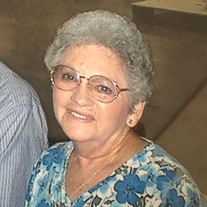 Joanna Francis Cross Thomas, 1927-2018 Born: April 1, 1927, Joanna Francis Cross was the second child to Oscar and Thelma Cross of Foster, OK. Joanna grew up in rural Oklahoma during the Great Depression, shaping the values that would guide her life of 91 years. Joanna met Paul Thomas at an early age at Burris High School, the start of a loving relationship that would last over eight decades. They were married on November 17, 1945, between military deployments. World War II and the Korean War era would greatly impact the Thomas family. As Paul was reassigned to numerous posts and duties, the family would likewise be moved from place to place. During this time, babies were a top priority for the Thomas family and a testament to the strength and strong maternal characteristics of Joanna. From 1944 to 1961 Joanna would give birth to nine children. Losing the first infant, the remaining eight children would become the Thomas clan. As the family would move from place to place, children were born in Oklahoma, Texas, Maryland, California, and South Dakota. As the family grew, Joanna’s loving and caring ways were ever present, providing all with the work ethic, moral foundation, and an unselfish commitment to others. Following the military years, Paul and Joanna moved their family to Elmore City, OK in 1960, and then bought a home in Alma that would become the Thomas household until 1977. During this time Joanna continued to shape the family, as the eight kids would complete school, go off to college or embark on a career, marry and start families of their own. The array of service-oriented professions of her sons and daughters, in-laws, and grandchildren are a true testament of her influence, as the family include military careers, teachers, preachers, nurses, and numerous service-oriented professions serving their communities. After a tornado damaged the Alma home in 1977, Paul and Joanna moved to Perry, Oklahoma. With most of the kids now raised and on their own, Joanna started her own career. Joanna worked with Paul in the transportation departments for Perry Schools (1977-1983) and Woodward Schools (1983-1989). Joanna managed the office, worked on routes, safety programs, and served as a substitute bus driver. Joanna and Paul retired from public service in 1989, moving back to Elmore City, where they would live for the remainder of their lives. Joanna was a dedicated wife and mother. In addition to all the cooking and cleaning that goes with a household of 10, Joanna found the time to enjoy other aspects of life as well. Joanna enjoyed fishing and would spend many an hour on the banks catching catfish. She also helped Paul trap, and for a short time (very short) she took up hunting. She loved to collect roosters of every shape and size. Joanna was also known for her quilting skills and many other arts and craft projects. In the early years, she would constantly be crocheting beautiful handkerchiefs and placemats for others. Later, she took up quilting, providing family keepsakes to commemorate weddings, births, and graduations, each sewed with love and pride. Many a grand baby received the infamous sock monkey. She was also a skilled painter, providing pictures of lovely landscapes, and turned rusty saw blades into works of art. Paul and Joanna were married 69 years, until Paul’s death at the age of 89 in 2014. Joanna loved being a mom and a grandmother. Paul and Joanna had nine children, one died as an infant. The eight children provided 20 grandchildren , 31 great-grand children, and one great-great grandchild. Joanna was preceded in death by her husband, Paul Edward Thomas; one infant daughter, Joanna Elaine; one son, Paul Edward Thomas Jr.; her parents, Oscar and Thelma Cross; and three brothers, Buster, Perry and Terry Cross. Joanna is survived by three sisters, Patricia Cole Seals, Norman,OK; Linda and Vernon Tallant, Cove, AR; and Marquita Cross , Pryor, OK; and brothers Victor and Joann Cross, Foster, OK, and Richard (Dick) Cross, Ardmore, OK. Joanna is survived by three daughters, Donna Rhea, of the home; Barbara and Mike Hardy, Durant; and Saphronia and Bill Whaley, Norman, and four sons, David and Debbie Thomas, Velma; Douglas and Debra Thomas, Lone Jack, MO; Gregory Thomas, Scottsdale, AZ; and Stanley and Melinda Thomas, Abilene, KS Joanna passed from this life on Christmas Day, 2018 surrounded by her children. Joanna enjoyed a full and rich life of 91 years. She was very spiritual, and she was a member of the Elmore City Church of Christ, which she loved very much. She was looking forward to joining her family members in Heaven. All are joyful. Funeral services will be held 2:00 p.m. Saturday, December 29th, 2018 in the Wooster Funeral Home Chapel in Pauls Valley. Visitation will be Friday, December 28th from 9:00 a.m. to 7:00 p.m. at the Wooster Funeral Home in Elmore City. Interment will be in the Elmore City Cemetery with Joe Terrell & Bill Whaley officiating. You may send a condolence to the family at www.woosterfuneralhomes.com

The family of Joanna Thomas created this Life Tributes page to make it easy to share your memories.