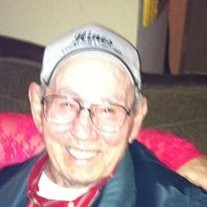 JIMMY RAY ROBINSON Jimmy Ray Robinson of Elmore City, OK passed away Sunday, May 26, 2013 at Lindsay Manor Nursing Home. Jimmy Ray was born to the late William Robert and Eula Lois Elizabeth (Townsend) Robinson in Pauls Valley, Oklahoma on April 18, 1937. He grew up in Wynnewood, and Pauls Valley attending Pauls Valley Public Schools until 8th grade. He quit school to help his parents provide for the family. He loved his brothers and sisters very much and had a special love for his mother. No stranger to hard work he harvested broomcorn and chopped cotton and was later employed by the City of Wynnewood caring for the cemetery. Jimmy Ray was also employed as a derrick hand working for Shebester Inc. He was paralyzed due to injuries but did not allow that life-altering incident to change his strong will to never complain while always offering others a warm welcoming smile. Jimmy Ray was introduced to the love of his life Jora Vene Robinson by her father Grady Meadows. He thought Jimmy Ray was a nice young man she should date. This intuition must have been accurate because it led to the couple being married on June 13, 1955 in Duncan, Oklahoma. They enjoyed a marriage that separated them only by her death on December 24, 2012. The couple raised their children in Elmore City. He taught his family by his example to put God first and family second. He taught them that life is not easy, but with strong faith anyone can make the best of it. His favorite scripture was 1 John 1. Jimmy Ray enjoyed bingo, going to the casino, raising coon hounds, coon hunting, traveling and was known as quite a “pool shark.” He was a smooth dancer and could twirl Jora Vene with the best. Jimmy Ray leaves to mourn his passing. Daughters: Lois Ann Lynn (Von) of Noble Vickie VanBuskirk of Elmore City Phyllis Hines (Richard) of Lindsay Brothers: Larry Dale Robinson of Moore Michael Gene Robinson of Duncan Phillip Don Robinson of Oklahoma City Sisters: Phyllis Moore of Lindsay Shirley Scott and Linda Morgan of Pauls Valley Betty Mahorney of Velma 14 Grandchildren and 16 Great- Grandchildren and a host of Nieces and Nephews He was preceded in death by: parents, W.R. and Eula Robinson; wife, Jora Vene Robinson; brothers, Ikie Robinson, William Robinson and R.P. Robinson; sons, Johnny Dean Robinson, Gary Lynn, and Jimmy Don Robinson; grandson Eric Lee Robinson and daughter-in-law Sharon Kay Robinson, also Son-in-law Johnny L. VanBuskirk Jr. Funeral services for Mr. Robinson are scheduled for Wednesday, May 29, 2013 at 10:00 a.m. in the First Baptist Church of Elmore City, Oklahoma with Sister Ellen Abshire officiating. Interment will follow in the Elmore City Cemetery under the direction of Wooster Funeral Home. Condolences may be sent to the family at www.woosterfuneralhomes.com

The family of Jimmy R. Robinson created this Life Tributes page to make it easy to share your memories.