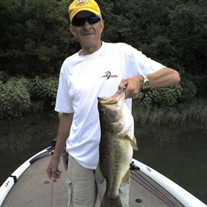 Jesse “Wayne” Hitt, 72, of Pauls Valley, OK peacefully passed away January 15, 2021 at home after a lengthy battle with Parkinson’s disease. Wayne was born in Ardmore, OK on October 7, 1948 to Haskell and Dorothy Hitt. At the age of 14 his family moved to Pauls Valley after purchasing the Stop-n-Go convenience store. He graduated from Pauls Valley High School in 1966. Wayne attended UCO before joining the army. He served in the 1st Cavalry Division in Vietnam from 1968-69. He was awarded the Bronze Star. Wayne married Phyllis Shamley on January 24, 1970. He was employed in the accounting and finance department at Samedan Oil Corporation which later became Noble Energy, Inc. in Ardmore where he worked for over 30 years. Growing up Wayne enjoyed playing baseball and fishing. He was an avid fisherman and enjoyed fishing trips with family and friends. Wayne loved watching sports, especially OU football. He also liked playing cards and games with his family. Wayne loved to laugh and took pleasure in teasing and pulling pranks, all with a twinkle in his eye. His family was the highlight of his life, especially his children and grandchildren. Wayne was kind, generous, and thoughtful. He was truly one of a kind. Wayne was preceded in death by his parents Haskell and Dorothy Hitt and daughter Kelly Best. Wayne is survived by wife, Phyllis , daughter, Kimberly Bracksieck and husband Mike, granddaughter Laney Hitt, grandson Tyler Best, of Pauls Valley, brother Lynn Hitt and wife Leslie, and niece Madeline Hitt, of Montgomery, TX. In lieu of flowers, the family request memorials be made to The Michael J. Fox Foundation for Parkinson’s Research www.michaeljfox.org Funeral services for Wayne Hitt are scheduled for Tuesday, January 19, 2021 in the Wooster Funeral Home Chapel in Pauls Valley at 2:00 p.m. Interment will follow in the Mt. Olivet Cemetery under the direction of Wooster Funeral Home. We highly recommend the wearing of masks and social distancing at the services. Condolences may be sent to the family @ www.woosterfuneralhomes.com

The family of Jesse Wayne Hitt created this Life Tributes page to make it easy to share your memories.