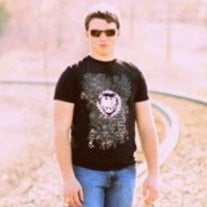 Jess Logan Horstman was born to Amy Conner and Denny Horstman in Ada, Oklahoma on November 21, 1993, and passed from this life on March 24, 2013. Jess lived his 19 years in Pernell, and graduated from Elmore City-Pernell High School in 2012. If you knew Jess Horstman, you loved him. He was known for an ornery personality, a twinkle in his eye, and a contagious smile, just being around Jess made you happy. His mom said Jess found great joy in everything he did, regardless if it was good or bad. He didn’t mind getting in trouble because 9 times out of 10, he could charm his way out of it with that smile. He once told Amy that “it’s the power of a smile mom”. (He was right) His Bubba said that Jess was the happiest kid he knew. He especially enjoyed aggravating his Grandad by goosing him to make him jump. He was the little boy’s favorite playmate, they would dog pile Jess until he played “Scare” with them. He was everyone’s best friend. In High School, Jess was active in FFA, serving as an officer for several years, and President his senior year. He earned countless awards, including the State FFA degree. Mr. Sharber laughed when he recalled how many times they were at an FFA function and Jess had an entourage of girls following him everywhere. (Guess he loved the girls just as much as he loved FFA) He said Jess would put on those shades and here they came! Dillon always said that Jess didn’t just have A girlfriend, he had girlfriends! He also was an accomplished athlete. His coaches have bragged on his mental and physical toughness, recalling how Jess played nearly his entire senior season with a broken shoulder. During the game against Wynnewood his senior year, Jess had 17 tackles in that game alone with that same broken shoulder. He always said, “Go Big or Go Home”. Jess was an avid outdoorsman. His Aunt JuJu says, “Jess loved to hunt, but he lived to fish.” If Jess had any free time at all, you could be sure he was going to spend it doing one of those things. His favorite home away from home was Deer Camp. His dad said that Jess didn’t care if the rest of the guys were there or not, if Jess could stay the night at camp he would. He loved nothing more than to hang at camp or the river with his “uncles” Eddie, Joey, Jeff and Jared. Denny said he is pretty sure Jess got into a lot more mischief than his uncles ever divulged. One of Jess’ greatest loves was food. Everyone in the family knew that you didn't get between Jess and the food at Nana's house. If you did, it was not unlikely to get knocked down or shoved into the wall by Jess as he tried to get there first. He had an uncanny knack for knowing when dinner was ready. Aunt Dusty usually ended up with the most bruises because she was crazy enough to be next to him in line. If there was any work to be done, you could always count on Jess to be there to help. His first job was working for Bud and Marla Arute feeding cows and mucking horse stalls. I’m pretty sure Jess and Bud spent more time sitting on the tailgate drinking a pop when Marla wasn’t looking! He had a strong back and stronger character. He was currently working for Wildcat Swabbing in Lindsay, OK. Jess was a member of the Satterwhite Missionary Baptist Church and was saved in July of 2007, and baptized in January of 2008. He spent many years at camp with his church. One year he came home from church camp with a huge roll of Saran Wrap and convinced Hollis to let him wrap her from her shoulders down with it. He told her that if she did, he would carry her around. Needless to say, she obliged him and he enjoyed her screaming immensely. Jess is survived by: his parents, Amy Conner and Darren Thompson, and Denny Horstman and Tammy Howell; his brothers and sisters, Dillon Horstman, Hollis Horstman, Amanda and Brian Berry, Nick Thompson, and Eric Thompson; his Grandad, Bill Conner; his Grandma, Cooky Coppock; his Nana and Papa, Bobby and Karen Thompson; and his Great-Grannies, Irma Jean Conner and Marzelle Kimble; Aunt JuJu, Uncle Brent, Will, and Zane; Aunt Dusty, Uncle John, J.W., and Collin; Uncle John, Aunt Carey, and Seth; Aunt Donya, Uncle Mike, Joseph, and Sadie; and many great aunts and uncles, cousins and second cousins. Jess is preceded in death by his Aunt Misty Spicer; his Mam, Jan Conner; his Pa-Paw, Luther Coppock; his Uncle, Sonny Jennings; his Uncle Ed; his Great-Grandpa, W.C. Conner; and his Great-Grandparents, J.L. and Helen Jennings. Funeral services are scheduled for 2 pm Saturday, March 30 at Wheeler Field in Elmore City, with Brother Allen Carroll officiating. Interment will be in the Foster Cemetery under the direction of Wooster Funeral Home. The family requests that memorials be made to a fund at both the Elmore City Branch and Pauls Valley branch of the Pauls Valley National Bank, which will be given to the Elmore City-Pernell FFA and the ECP football team in honor of Jess. Condolences can be sent to the family at www.woosterfuneralhomes.com.

Jess Logan Horstman was born to Amy Conner and Denny Horstman in Ada, Oklahoma on November 21, 1993, and passed from this life on March 24, 2013. Jess lived his 19 years in Pernell, and graduated from Elmore City-Pernell High School in 2012.... View Obituary & Service Information

The family of Jess Logan Horstman created this Life Tributes page to make it easy to share your memories.