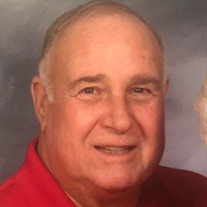 Jerry Wilmas Purser of Elmore City, Oklahoma was born to Wilmas Raymond Purser and Ruby Marie (Bolles) Purser on October 2, 1941 in Pauls Valley, Oklahoma. He passed from this life on January 22, 2020 in Elmore City, Oklahoma at the age of 78 years. Jerry grew up and attended school in Pauls Valley, Oklahoma, graduating from Pauls Valley High School in 1959. He began attending East Central University. He married Kay Pyle on July 12, 1962 and they lived in Pauls Valley. Jerry continued attending East Central University where he obtained a Bachelor’s Degree in History with a Minor in English. Jerry worked for Field’s Gas Station in his younger years. Jerry and Kay moved to Elmore City in 1997, where they resided until his death. He began working for Colley & Co., Inc. in 1962 while attending college. Upon graduation, he worked full time, where he was later promoted to General Manager in 1970, then to Vice President in 1971. He retained that role until his retirement in 2007. He was a member of Kiwanis, president of the PTA, and Scoutmaster of Boy Scout Troop 72. In his younger years, Jerry owned a race car and was a pit master at I-35 Speedway. Other hobbies he enjoyed during his lifetime included playing fast pitch softball, going to antique auctions, collecting barbed wire and coins, antique jars, coaching little league baseball and youth basketball, and attending his grandchildren’s ballgames. He also loved going on family vacations and traveling to different parts of the country with Kay and friends. Jerry currently owned an antique shop in downtown Elmore City. Jerry loved to meet people. He will be greatly missed. Mr. Purser is survived by: Wife: Kay Purser of the home Son: Jerry Dan (Danny) Purser Daughter: Cathey Johnson and husband Royce Grandchildren: Maegan McConnell and husband Steven Casey Stoup and husband Ryan Rhett Johnson, Emma Johnson, and Maverick Johnson Great-Grandchildren: Steven Case and Addisyn McConnell Mr. Purser was preceded in death by: Parents: Wilmas and Ruby Purser Funeral services are scheduled for 10:00 a.m., Saturday, January 25, 2020 at the First Baptist Church in Elmore City, Oklahoma with Rev. Danny Reed officiating. Interment will be in the Elmore City, Cemetery under the direction of Wooster Funeral Home. You may send a condolence to the family at www.woosterfuneralhomes.com.

The family of Jerry Purser created this Life Tributes page to make it easy to share your memories.