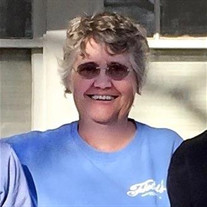 Janna Sue Field passed away peacefully on Sunday, September 1, 2019 at her home in Pauls Valley, OK at 64. Janna was born on June 21,1955 and grew up in Pauls Valley, graduating from PVHS in 1973. She graduated from OSU Tech in 1978 with a degree in Technical Illustration. Janna married Richard B. Johnson Jr. in 1978, and moved to Dallas, TX shortly after. She utilized her degree in Technical Illustration for several years at Texas Instruments before having their first child, Field in 1983. She then left to focus on motherhood full-time. 7 years later in 1990 their second child, Allen was born. After she and Richard divorced in 1993, she moved back to Pauls Valley to be close with family and to continue raising her two sons. Janna had an artistic soul and an insatiable need to create. Her creative talents and generous spirit led her to creating countless stained glass pieces, mosaics, and furniture - much of which she would gift to friends and family. Janna worked in several other creative mediums as well including painting, woodworking, quilting, needlepoint, antiquing, collecting clocks, and more. When she wasn’t constructing works of art, Janna spent time nurturing and cultivating her plants and flourishing garden in and out of her home. Janna was a voracious reader with a vast library spanning everything from history to fantasy. Her vocabulary was as expansive as her library and she loved solving word searches and crosswords. She passed on her love of literature and the English language to her children. Always an industrious and hardworking woman, Janna spent over 20 years renovating her beautiful home and did most of the improvements herself. Her home is filled with cherished memories of her with her family, friends, and animals. Beyond the reach of her own home, Janna left her legacy all over town. She loved to spend time helping people get their lives and homes in order. Janna was an incredibly compassionate person and had a huge heart for animals. She spent much of her time volunteering as a P.A.W.S. (Pauls Valley Animal Welfare Society) member at the local animal shelter. She adopted several pets into her family over the years from the same. Janna’s altruism was apparent in the selfless acts she did for people and animals alike. She was beloved by her community of both - people and animals. Janna will be fondly remembered as a strong and witty woman filled with tenacity and grit and she lived a full life as an independent woman, a loving mother, a steadfast sister, a devoted daughter, and a loyal friend. Janna was loved immensely and her legacy lives on through her two sons Field and Allen Johnson (Austin, TX), sister Jenny Wallace (Pauls Valley, OK), brothers Brick Field (Dallas, TX) and Chris Field (Pauls Valley, OK), mother Wanda Field-Manatowa (Davis, OK), many adoring friends, and her fur-children Lucy and Cat. Janna was preceded in death by her father - Julian Miller Field Jr., known affectionately as JuJu. Online condolences and memories can be shared on woosterfuneralhomes.com/obituaries/Janna-Field. The family will be having a Celebration of Life at a future date. In lieu of sending flowers, please make donations to the Pauls Valley Animal Shelter (300 E. Airport Industrial rd. Pauls Valley Ok) in loving memory of Janna Field

Janna Sue Field passed away peacefully on Sunday, September 1, 2019 at her home in Pauls Valley, OK at 64. Janna was born on June 21,1955 and grew up in Pauls Valley, graduating from PVHS in 1973. She graduated from OSU Tech in 1978 with a degree... View Obituary & Service Information

The family of Janna Sue Field created this Life Tributes page to make it easy to share your memories.