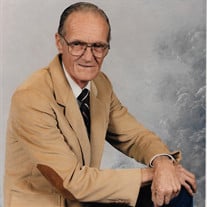 James Harlan Newton Jr. was born October 4, 1927 at Chickasha, OK to James Harlan and Bertie Newton. He passed from this life on Wednesday, August 16, 2017 in Paoli, OK. He attended school at Spring Creek and Middleberg schools. He married Lois Marie James on March 26, 1948. Many friends and family knew them as Chick and Cheesy. He joined the Army in July, 1952 and did his training in Fort Benning, Ga. He was in the 82nd Airborne and was stationed in Fayetteville, NC. They later moved to Alameda, California after he was transferred to San Francisco with the Army Reserve. They lived there until they moved back to the Chickasha area in 1965 where he later opened a service station. They moved to Paoli in 1970 when they opened a Montgomery Ward catalog store, and later a JC Penney catalog store. James also continued to do appliance service repair in the Pauls Valley area for many years. James attended the United Pentecostal Church in Wynnewood and was baptized in Jesus name on August 26, 2007. He was preceded in death by his parents, James and Bertie Newton, two sisters, and his wife, Lois. He is survived by his sons Ken, and wife Kathy, of Wynnewood, Richard, and wife Robin, of Wynnewood, Robert, and wife Pattie, of Corpus Christi, TX, and daughter Jana, and husband James Moutaw, of Lindsay, Oklahoma, 16 grandchildren, and 29 great-grandchildren. He is also survived by three sisters, Jean Taylor, Margie Howe and Lula Bonds, all of Chickasha, OK, and a host of nieces and nephews. Funeral services will be held Saturday, August 19, 2017 at 10:00 AM at Wooster Funeral Home in Pauls Valley with Reverend Mark Stacy officiating. Graveside service will follow at Hillside Cemetery, Purcell, OK. You may send a condolence to the family at www.woosterfuneralhome.com. Pall Bearers: John Feroli Wayne Howe Steve Taylor Jamie Bonds Kyle Newton Mike Feroli Steve Taylor John Emerson Blake Hilderbrant Honorary: James Moutaw Joshua Newton Dustin Newton Greg Bento Max Nase

James Harlan Newton Jr. was born October 4, 1927 at Chickasha, OK to James Harlan and Bertie Newton. He passed from this life on Wednesday, August 16, 2017 in Paoli, OK. He attended school at Spring Creek and Middleberg schools. He married Lois... View Obituary & Service Information

The family of James Harlan Newton Jr. created this Life Tributes page to make it easy to share your memories.