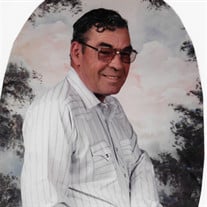 James D. “Sonny” Moore of Lindsay, Oklahoma was born to L. S. and Nora Christine (McMillan) Moore on August 8, 1932 in Ringling, Oklahoma and passed from this life on January 22, 2016 in Lindsay, Oklahoma at the age of 83 years. Sonny grew up and attended school in Ringling, Oklahoma and Mt. Home. He served his country in the U. S. Army during the Korean Conflict and later the National Guard. Sonny retired from military service with several medals including a purple heart. On April 10, 1984, Sonny married Phyllis Robinson in Pauls Valley, Oklahoma. He was a member of Erin Springs Baptist Church where he taught Awanas. He was also an Elder of the Chickasaw tribe. In his spare time he enjoyed making jewelry, leather work, dominoes and puzzles. The highlights of his life were his family, grandchildren, and church. Mr. Moore is survived by: Wife: Phyllis of the home 2 sons: Coy Talbott and wife Julie of Velma, Oklahoma Ricky Sudbury and wife Marilyn of Duncan, Oklahoma 2 daughters: Elizabeth Pelham of Lindsay, Oklahoma Melba Little and husband Gary of Lindsay, Oklahoma 1 sister: Mary Davis of Davis, Oklahoma 12 grandchildren, 29 great-grandchildren and 6 great-great-grandchildren A host of nieces, nephews, family and friends. Mr. Moore was preceded in death by: His parents: L. S. and Nora Moore Brother: Benny Moore 2 sisters: Betty Foster and Patsey Norton Funeral services are scheduled for Thursday, January 28, 2016 at 2:00 p.m. at the Erin Springs Baptist Church with Rev. Clay Hicks officiating. Interment will be in the Oaklawn Cemetery in Wynnewood, Oklahoma under the direction of Wooster Funeral Home. Visitation will be held Tuesday, 9:00 a.m. to 4:30 p.m. and Wednesday, 9:00 a.m. to 7:00 p.m. at Wooster Funeral Home in Pauls Valley, Ok. You may send a condolence to the family at www.woosterfuneralhomes.com.

The family of James D. "Sonny" Moore created this Life Tributes page to make it easy to share your memories.