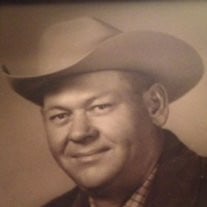 Ely, James S. “Jim”, 87, passed away on Saturday, December 28, 2013 in Pauls Valley, Oklahoma. He was born in Hastings, Oklahoma on December 19, 1926, the son of Wheeler Myron and Mary (Burum) Ely. He graduated from Comanche High School in 1944 and served as a Merchant Marine during World War II. He married Imogene Hughes in 1946. They had five children: Darinda, Myron, Steve, Kevin and Karen. Imogene passed away in 1993 after 47 years of marriage. He later married Evelyn Randolph. Jim spent his life involved in many different business endeavors including cattle, real estate, oil, farming, and livestock auctions. He loved being an Oklahoman, the Dallas Cowboys, and playing dominoes. Most of all, he was a devoted and caring father and grandfather. He especially enjoyed watching his children and grandchildren play sports. When others spoke of Jim, they often said things like “he was one of a kind,” or “there will never be another Jim.” He loved deeply and generously and had the rare ability to put everyone he met at ease and brighten their day. He always kept a positive attitude and wanted others to do the same. It is fitting to close with one of his many famous sayings: “Everybody say Bye Jim!” Surviving are Evelyn Randolph, his sons Myron (Debra) Ely, Steve (Liz) Ely, Kevin (Chanda) Ely, his daughter Karen (Shannon) Pool, sister Arlis Simmons, grandchildren Amber and Amie Ely and their mother Tina, James Morgan "John" Ely, Jacob Ely, and Sara and Gracie Pool, and numerous other family and friends. He is preceded in death by his parents Wheeler and Mary Ely; wife Imogene Ely; daughter Darinda Ely; and sisters Margaret Hellander, Betty June Ely, and an infant sister. A memorial service and celebration of Jim’s life will be held at Wooster Funeral Home in Pauls Valley, Oklahoma at 1 pm on January 2, 2014. Memorial contributions may be made to The Samaritans, Box 638, Pauls Valley, OK 73075.

The family of James "Jim" Stahl Ely created this Life Tributes page to make it easy to share your memories.