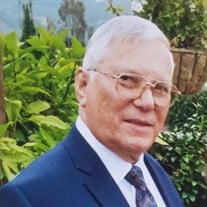 Jack Arnold Fowler peacefully passed into God’s loving hands on November 29th, 2020 at 77 years of age in Pauls Valley, Oklahoma in his childhood home. Jack graduated from Pauls Valley High School and attended Oklahoma Baptist University, where he was a member of the Bison Glee Club. He served with the US Army in Arabia and was a member of the Air Defense Army Choral Group. Afterward, he attended the University of Oklahoma where he was a member of the OU Men’s Glee Club and Alpha Tau Omega fraternity. He met his first wife, who is still his lifetime friend, Georgeanna Lawson at OU while singing in an opera together and they married in Tulsa Oklahoma on November 29th, 1968. Jack graduated from OU with a degree in Business Administration and accepted a job in Dallas, Texas. In 1972, he and Georgeanna were blessed with their first daughter, Krista Lynn. Shortly after, they moved to beautiful Ruidoso, New Mexico where he became a successful business manager. Jack joined the Ruidoso Baptist Church where he and Georgeanna were directors and choir members. In 1975, they were again blessed with their 2nd daughter, Kimberly Dawn. A few years later, Jack opened his own small business, Jack’s Hollywood Food Mart, where he remained the owner for over 20 years. While in Ruidoso, Jack truly enjoyed the majestic beauty of the mountains when riding his motorcycles, flying his airplane, and fishing for Rainbow Trout at his favorite spot at Bonito Lake. Jack retired, sold his business and moved to Texas, but eventually came back to his hometown of Pauls Valley, OK. There, he was able to spend time with his younger brother Terry Fowler until he passed in 2017. He became a member of the First Christian Church of Pauls Valley and graced them with his lovely Baritone voice. He made many close friends there, some of whom he lovingly referred to as the “The Wild Bunch” and was blessed to have the pastor and these church members checking in with him over the years. What a gift from God! Jack was also very blessed to have been welcomed into the Oklahoma City Veteran’s Association where he attended many classes and received overwhelming love and friendship, especially from one particular men’s group who essentially saved his life in more ways than anyone can know. He will forever be blessed by the people and counselors there as well. Finally, Jack was always grateful for the friendship, camaraderie and many amazing meals provided by the Pauls Valley Senior Center that he very much enjoyed over the years! Jack is survived by his two daughters, Krista Lynn Prestegard of Clermont, Florida and Kimberly Dawn DiFranco of Monterey, California, their husbands Justin Prestegard and Vincent DiFranco, his 4 granddaughters Emma Lynn DiFranco (14), Madisen Dawn Prestegard (13), Gabriella Jean DiFranco (10), and Morgan Sue-Anna Prestegard (10), his nephew Tray Fowler and ex-wife Georgeanna McKinney. Jack will forever be remembered by his family for his beautiful voice, his obsession of beautiful plants, love of amazing aquarium tanks, silly time spent with his funny green bird E.T. and dog Snooky, his constant attacks by Goody the Cat while playing his mother’s piano, his enthusiasm for a weekly motorcycle ride on the open road, witty sayings that have somehow trickled into his daughter’s lives, and funny humor. They are comforted with the knowledge that he passed peacefully in his sleep and know that he is now in God’s Kingdom enjoying singing with the choir of angels! God Bless Him and Keep Him, now and forever! Jack has been laid to rest in Mt. Olivet Cemetery with his parents Waunera and Ray V. Fowler, Section 2, Block 1, Lot 26 between spaces 5 and 6. Condolences may be sent to the family at www.woosterfuneralhomes.com

The family of Jack Arnold Fowler created this Life Tributes page to make it easy to share your memories.