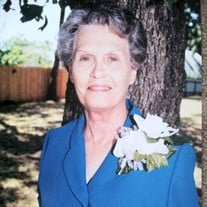 Irma Jean (Attaway) Conner came into this world June 25th, 1927, as a very special gift to a young coupled named Roy and Audrey Attaway. As a lifetime area resident, she attended school at Burrows High and there met the love of her life William Chester Conner, Sr, (Billy) as she called him, and they were married on September 10th, 1943. For over fifty-six years, that relationship stayed the course of time until his death in February 1999. Billy and Irma Jean had five children; Lana, Bill Jr, Jeannie, and twins Kay and Fay. In many ways, the gift that had been received way back in 1927 multiplied through the lives of her children, grandchildren, and great-grandchildren. Irma Jean was a hard working woman always taking care of her home and family. She always had a pot of beans on the stove and the house was always open to anyone who happened to stop by at meal time. She was an excellent cook and meal time was always a special time where all seven of them gathered around the table. As the years went on and her kids/grandkids would come in for the weekend, she delighted in cooking for all of them. She loved the laughter and even all the noise her large family brought to her. In addition to her family, numerous aunts, uncles, cousins and friends in the community enjoyed many delicious meals in her home and spent hours visiting. She was also an excellent seamstress and for years made clothes for her kids. She worked endless hours in the huge garden we planted and would can and freeze enormous amounts of vegetables and fruit. She also saw to it that the cattle, and any other tasks around the home were tended to, especially when Daddy would be out on the job. She will be missed, and sometimes we will wonder how we're going to make it, it’s in those times we look upon our Mother’s strength and her love, and then we know that everything will be OK. She was preceded in death by her loving husband Bill Conner, her daughter, Kay Conner Busey, her great-grandson, Jess Logan Horstman; her daughter-in-law, Jan Wampler Conner, along with her parents, and her brother Don Attaway. She is survived by her daughter, Lana and husband David Mills, Bedford Texas; her son, Bill Conner, Jr. of Foster, OK,; her daughter, Jeannie Satterwhite of Oklahoma City; her daughter Fay Conner of Elmore City, OK and son-in-law, David Busey of Elmore City, OK. She is also survived by nine grandkids: Kari Corbin, Jon Mills, Amy Conner, Julie Balentine, Dusty Cagle, Kim Carter, Melissa Zumwalt, Bonney Warden and Leigh Gwin. She was the proud Great Granny to 20 great-grandkids. She leaves behind a host of extended family and friends. Funeral services are scheduled for Friday, February 24, 2017 at 2:00 p.m. at the Elmore City First Baptist Church. Interment will be in the Foster Cemetery under the direction of Wooster Funeral Home. You may send a condolence to the family at www.woosterfuneralhomes.com.

Irma Jean (Attaway) Conner came into this world June 25th, 1927, as a very special gift to a young coupled named Roy and Audrey Attaway. As a lifetime area resident, she attended school at Burrows High and there met the love of her life William... View Obituary & Service Information

The family of Irma Jean Conner created this Life Tributes page to make it easy to share your memories.