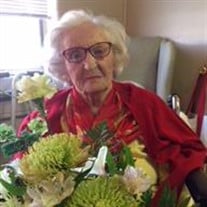 Our Story Begins at Home. Most of Irene’s life was lived near Dancing Rabbit Creek or just up the hill. Though she is physically gone from us, the memories of her linger there still. Many times, she danced while her daddy played the French harp and the banjo. On summer evenings she and Edgar sat and talked and made plans in the moon glow. She raised her children and taught them to love nature as she did, Like watching a snowflake as it drifts down and lands on your eyelid. She lived an exemplary life of good moral character and doing your duty. All the while, she cooked, worked cattle and only stopped to enjoy the world’s beauty. On December 15, 1917, only 10 years after Oklahoma became a state, Irene entered this life as a very special gift to James Alexander and Hettie Josephine (Davis) Barker and her adoring older sister Lorene. Dancing Rabbit Creek of southwest Garvin County was a natural nature paradise, and it was there that Irene developed a love and appreciation for the beauty of nature which remained with her throughout her life. There in that lovely setting she attended Oak Grove School which also served as the place of worship for the community. She had her introduction to Jesus at that church and later attended school there with the handsome young gentleman, Edgar Newby who was to become her lifetime partner. Irene completed her high school education at Lindsay High, graduating with the class of 1937. Irene was the last living member of her graduating class. Irene and Edgar were married on February 25, 1939 in Lindsay at the home of Edgar’s sister, Anna Pat and her husband Vernon Burkleo. The young couple’s commitment to family led them to make a home near Irene’s parents. Irene was physically strong as well as being strong willed. After reaching a decision regarding some issue, Irene’s attitude to the success of that decision was “I will not contemplate otherwise”. She was gentle, never complained, was witty, ornery, resilient and had the patience of “Job”. Edgar and Irene worked and pulled together like a team of well matched horses. Each morning they began the day by preparing breakfast together. Irene was a fabulous cook; unequaled at preparing wild game. She enjoyed needle work and sewing and delighted in the colors of pink and green. Edgar and Irene owned many animals over a long period of time, including cattle, hogs, chickens, and horses. Irene named every animal and called them each by name and was upset when you could not do likewise. Irene was an example to her children of the importance of every day observing, listening, and appreciating. Nature, for Irene for as long as she could remember was a source of solace, inspiration, adventure and delight, a home, a teacher, and a companion. She gave her children her deep appreciation of the changing seasons. Winter snows and chills; bulging bulbs of February peeping through the ground never escaped Irene’s eyes as they touched her heart with their beauty. Dig and plant in the soil, labor, wear and tear, gorgeous wildflowers filling the pastures; the master painter waved his brush; the autumn sumac red and bright; the harvesting of her dad, James Barker’s famous Hillcrest Beauty sweet potatoes; the bite of Jack Frost and then watching the winter birds come in and hearing the crackle of the fireplace. Irene was recently inducted into the Oklahoma Centenarians club. Her mind was sharp as a steel trap and even after being 100 years old, she wanted to hear the oil and gas reports on Oklahoma Energy Today’s website and listen to the stock markets and the reports in the Journal Record. Irene was a fan of the internet and was always telling her children to look that up on your iPhone. She enjoyed following Oklahoma State University sports, especially men’s basketball. Irene was adamant that her children receive a good education. Irene’s transition to eternal life was in the setting of a natural nature paradise surrounded by a canopy of trees outside her windows while squirrels and birds carried on their busy lives at the nearby feeders. It was a Sunday morning and the master planner had designed the perfect setting in which Irene could let go of this life and take His hand. Our Story Begins at Home was the message written on Irene’s lovely casket quilt which she chose. The things she valued most were home and family. Irene is survived by her children, Brenda and her family; Kent and his family; and Jody and her family; her beloved niece, Ann; and several special nieces and nephews. Irene was preceded in death by her parents, husband Edgar Newby, sister, Lorene Barker White and nephew, James David White. Irene was laid to rest in Purdy Cemetery next to her beloved husband, Edgar and between her parents and her grandparents. The family requests memorials be made to: OSU Foundation, 400 S. Monroe, Stillwater, OK 74074.

Our Story Begins at Home. Most of Irene&#8217;s life was lived near Dancing Rabbit Creek or just up the hill. Though she is physically gone from us, the memories of her linger there still. Many times, she danced while her daddy played the French... View Obituary & Service Information

The family of Irene Barker Newby created this Life Tributes page to make it easy to share your memories.

Our Story Begins at Home.
Most of Irene’s life was lived near...