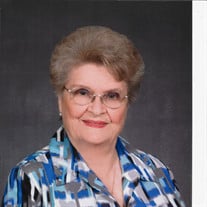 On Friday, March 18, 2022, our beloved mother and grandmother Helen Delories Gore Schmidt received her greatest wish and joined our dad, William Henry Schmidt in Heaven. Helen was born on October 13, 1930 to Alvin Green Gore and Ruby Maple Hair Gore in Henrietta Texas, both who previously preceded her in death. Her stepfather, Herman Buerger, who was dearly loved, also had preceded her. Helen had one sibling, Wanda Mae Gore Cumbie, who also preceded her in death. Mom was the last of her generation in our family to pass through those Pearly Gates. Helen was granted the long life promised for God’s believers, having achieved 91+ years on this earth. She died at The Willows in Pauls Valley, OK. She had a very strong Christian faith and was a powerful prayer warrior. Helen was a loving and devoted Mother, Grandmother, mentor, and friend; a privilege to know. Her bright smile and cheerfulness brightened everyone’s life she met. She will be greatly missed by everyone who knew her, especially her family. Helen lived her life with passion, joy, acceptance of all people, always with continued focus on family and friends. She was an incredible example of kindness, honesty, integrity, love, grace, strength and faith. When any of her five children were experiencing difficulties in life, she would always remind us that God is in control, that He has a plan, and this too shall pass. She lived her life based on these truths. Helen never stopped learning, mentoring, or teaching others, especially her family. She acquired her GED after marriage and self-taught herself ten-key, typing, shorthand, computer skills, sewing, flower arranging, woodworking, and gardening. She began publicly working in 1969, while continuing to actively support her children’s many activities (especially music, church, and sports). She retired from Halliburton in 1992 as an administrative assistant. Helen was an active member of the First Baptist Church of Elmore City, Eastern Star organization including Rainbow Girls, OHCE activities, bridge card clubs, and huge sports fan. She was a woman of many talents. Helen’s greatest pride was her family. She worked very hard and resourcefully to raise her five children, all of who she was very proud. She embraced our spouses as additional children, loving each as her own. Her children consisted of Sandra Mae Schmidt Gray (husband Stephen Wolf) of Kaufman TX, Deborah Kay Schmidt Acquavella (husband Frank Acquavella) of Elmore City OK, William Ray Schmidt (wife Barbara Schmidt) of Norman OK, Michael Wayne Schmidt (wife Jan Dodson) of Oklahoma City OK, and David Karl Schmidt (wife Vicki Schmidt) of Elmore City OK. Of special pride were her ten grandchildren, eight great grandchildren and one great great-grandchild. Each achievement and accomplishment of her children and grandchildren were a source of joy for her. Family viewing is at Wooster Funeral Home in Elmore City, OK, on Tuesday, March 22, from 1pm to 5pm and on Wednesday, March 23, from 9am to 7pm. Family will receive friends on Wednesday from 5pm to 7pm. We will gather on Thursday March 24, 2022 at 1pm at the First Baptist Church, Elmore City, Oklahoma to share both our joy of the gift of her life as well as the sorrow of her passing. Burial will immediately follow the funeral services at the Elmore City Cemetery. In lieu of flowers, donations can be submitted to the American Kidney Association, Susan G. Komen Breast Cancer Association, or P.A.W.S. in Pauls Valley, Oklahoma.

The family of Helen Delories Schmidt created this Life Tributes page to make it easy to share your memories.