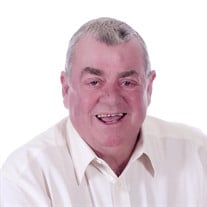 Harold Gene Marcum was born on September 03, 1940 to W. N. and Gladys (Berry) Marcum in Wayne, OK. Harold grew up in Purcell and attended Johnson School and graduated from Purcell High School in 1958. Harold drove a school bus at age 16 for Purcell school systems as a teenager always trying to make a little extra money. He was also one of the youngest drivers for Oklahoma Milk Producers Association, where he won the safe driving award at the age of 19. He married Barbara Ann Seiber on August 30, 1961 and has resided in Pauls Valley since that day. He began working for his father-in-law Dick Seiber. After Mr. Seiber passed away, Harold and Ann purchased the excavating business and renamed it Harold Marcum Excavating. He is survived by wife Ann, their three sons, Harold Gene Marcum, Jr. of Pauls Valley, Dr. Kevin Marcum of Frisco, TX and R. Alan Marcum of Purcell; Jana Marcum of Goldsby; his brother, Larry Marcum and nephew, Mark Marcum of Purcell, OK; seven grandchildren: Taylor Marcum, Harold Gene Marcum III (Trai) Hunter Marcum, Kaile Marcum, Jonathon Marcum, Cameron Marcum, Grant Marcum and one great-grandson: Harold Gene Marcum IV (Gracin). He also enjoyed his time with his cousin, Dr. Jerry McCall and special daughter, Jova Stanley and beloved dog Rusty. He is preceded in death, by his sister Deloris Marcum, his parents W.N. (Bill) and Gladys Marcum and his mother and father-in-law Dick and Dude Seiber. Never a stranger to hard work, he was self-employed and an entrepreneur with business ventures in the oil and gas service industry, real estate development, and most recently western wear in STEPPIN out. He created many businesses such as, Valley Rentals, H&M Supply, Mar 5, 93 Rentals, Repo Depo, and Buzzard Airlines. After the oilfield crashed in the 80’s, Harold started Marcum Development and created several additions for families across Garvin County, including: Rolling Hills, Shady Acres, Whispering Hills, Out West, Lake Ridge Estates, Quail Run, and Oak Ridge. In 1985, Harold opened a western store called “STEPPIN out” located east of Pauls Valley, opening his second store in Ada, OK in 1990 and ventured to Emenence, MO and Gainesville, TX. Opening the most recent store at Chickasha, OK last October. Harold served over 15 years on the Garvin County Rural Water District and did numerous community services through his lifetime. He enjoyed the thrill of doing a deal and the trading that went along with it. Harold’s humor was witnessed by his friends on a daily basis either at his breakfast outings, family gatherings or customers, whom some came to shop and others just to visit with him to enjoy stories from the past or present. He also appreciated his many employees at STEPPIN Out and their hard work and dedication. Visitation for Harold will be held Sunday, July 5th, 2015 from 1:00- 5:00p.m. at Wooster Funeral Home in Pauls Valley, OK. The Family will receive friends from 3:00p.m.-5:00p.m. Graveside services will be Monday at 2:00 p.m., July 6, 2015 at Mt. Olivet Cemetery in Pauls Valley, OK with Rocky Walker officiating. Services are under the direction of Wooster Funeral Home. In lieu of flowers, donations would be welcome to the 4M Family Scholarship Foundation at 24104 230th St Purcell, OK 73080. You may send a condolence to the family at www.woosterfuneralhomes.com

Harold Gene Marcum was born on September 03, 1940 to W. N. and Gladys (Berry) Marcum in Wayne, OK. Harold grew up in Purcell and attended Johnson School and graduated from Purcell High School in 1958. Harold drove a school bus at age 16 for... View Obituary & Service Information

The family of Harold Gene Marcum created this Life Tributes page to make it easy to share your memories.