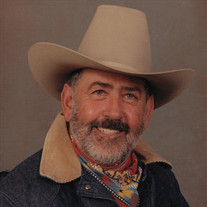 Hal Colquitt Blevins of Pauls Valley, Oklahoma was born to O B and Nina Elizabeth (Levens) Blevins on September 24, 1933 in Rotan, Texas and passed from this life on January 22, 2019 in Arbuckle Memorial Hospital in Sulphur, Oklahoma at the age of 85 years. Hal grew up in Rotan, El Paso, and Abilene Texas. He attended Abilene High School, McMurry and Abilene Christian College. He also attended St. Mary’s in Ft. Worth and finally the University of Oklahoma in Norman. Hal was always a “cowboy” in his heart, but a lab and x-ray technician by trade. On January 11, 1958 Hal married Joe Anne in Albany, Texas. They moved to Pauls Valley in 1964 where they grew to love the town and the people in it. Before Hal lost his sight he rode a bronco or two, was a hunter, fisherman, sailor, photographer and rancher. Hal loved to read any and everything he could get his hands on and then “discuss” it with anyone interested. He was a history buff and he loved the Old Testament. He also enjoyed taking motorcycle trips as well as singling and playing music “with the guys.” Hal was a member of the First Presbyterian Church, the Samaritans, Elks Lodge and a city councilman. He was a 32nd degree Mason of the Scottish Rite, a member of Valley Lodge #6 and served in the Air Force. Hal never met a stranger, he was a social butterfly and was often “the life of the party”. He will be sorely missed. Mr. Blevins is survived by: 3 Sons: Gary Blevins and wife Terri of Conroe, TX, Larry Blevins and Jeffrey Blevins of Elmore City, OK Daughters: Cindy Browne and husband J.D. of Elkins Lake, TX and Janet Guinn and husband Tim of Oklahoma City, OK Brother-in-law: Don Huddleston of Elmore City, OK 6 grandchildren and 10 great-grandchildren He was preceded in death by: His wife: Joe Anne Parents: O B and Snooks Blevins Brother: Ronnie Blevins Sister: Linda Huddleston Grandson: Cody John Maddox Memorial services are scheduled for 2:00 p.m. Tuesday January 29, 2019 at The First Presbyterian Church. Cremation arrangements are under the direction of Wooster Funeral Home. In lieu of flowers, a donation to the Samaritans of Pauls Valley, P.O. Box 638 would be greatly appreciated. You may send a condolence to the family at www.woosterfuneralhomes.com.

Hal Colquitt Blevins of Pauls Valley, Oklahoma was born to O B and Nina Elizabeth (Levens) Blevins on September 24, 1933 in Rotan, Texas and passed from this life on January 22, 2019 in Arbuckle Memorial Hospital in Sulphur, Oklahoma at the... View Obituary & Service Information

The family of Hal Blevins created this Life Tributes page to make it easy to share your memories.