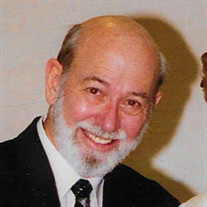 H. Glenn Prater passed away peacefully on November 7th in the compassionate staff's care at the Integris Hospice House in Oklahoma City after suffering a massive stroke. Glenn was born in Lamar County, near Roxton, Texas, on April 19th, 1932, then moved with his parents, Ruby and Doyle Prater, to Canyon, Texas, where he graduated from Canyon High School. He was called "Honey Boy" by his revered Mama, no matter how old he was! After high school, he joined the Navy and served in the Korean War until he was discharged in 1955. Years after he met the true love of his life, Nancy Trahern, of Pauls Valley, they were married on January 4th, 1998. When they moved back to Pauls Valley, Glenn discovered that Nancy could not have a glass of wine when they went out to dinner. He rectified that by forming a committee in 2006 to place liquor by the drink on the November ballot. He and his fellow committee members worked tirelessly to ensure the ballot passed, and in November, Garvin County was no longer a dry county. Even before then, he dabbled in politics when he ran for County Commissioner in Gilmer, Texas. While he did not win the seat, he successfully changed the "good ol' boys" politics and practices formerly in place there. He had two wonderful children, Steven Reese Prater (LuAnne) of El Dorado, AR, and Shelley Denise Prater of Westcliffe, CO, with his first wife, Virginia. He was an incredible Grandfather to Levi Prater (Jenna), Jessica Prater Crook (K.C), Smokey Solis (fiancé Hannah), and the proud Great Grandfather to Elijah, who he called Griff. To Glenn, family was everything! He would drive hundreds of miles to visit his son and his family and older sister, Jean Prater Reed, in El Dorado, AR, his daughter Shelley in Colorado, and his younger sister Rebecca (Becky) Prater Bachman and her husband, Bill, at their lake house in Michigan. And, he always kept in touch with numerous aunts, uncles, and cousins. He could eloquently recite poems from memory and, he had a passion for the open road, driving big rigs until he was 83. Two of his most favorite things to do was take Nancy to beaches so she could search for special shells and take her to New Orleans so he could watch her eat her way through dozens of oysters! He loved Texas and Oklahoma football and all college basketball teams, almost as much as he did cooking for himself, Nancy, and their friends! He will be sorely missed! But his family and many friends have many wonderful memories of their time with him that will make them smile whenever they think of him. The family has postponed the services at this time due to the covid situation.

H. Glenn Prater passed away peacefully on November 7th in the compassionate staff's care at the Integris Hospice House in Oklahoma City after suffering a massive stroke. Glenn was born in Lamar County, near Roxton, Texas, on April 19th, 1932,... View Obituary & Service Information

The family of H. Glenn Prater created this Life Tributes page to make it easy to share your memories.

H. Glenn Prater passed away peacefully on November 7th in the...