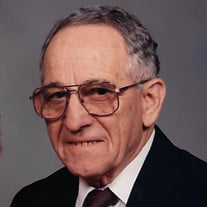 Glen E. Murray passed away July 22, 2019. Glen was born on August 3, 1921 near Dillon, Kansas to Roy H. and Naomi A. Murray. Glen grew up on his parents’ dairy farm with an older brother, two older sisters and a younger sister. In October, 1942 he enlisted in the Army Air Corp and, after training as a radio operator, was stationed in Framlingham, England as a member of the 390th Bomb Group. On his 25th mission his B-17 was shot down over enemy territory near the town of Quakenbruck, Germany. The crew parachuted out and was quickly surrounded by angry residents of the nearby town. He was taken prisoner by German troops and was taken to Frankfurt for interrogation. He spent 14 months in five different prison camps before he was liberated from Stalag 7A in Moosburg, Germany by General George Patton’s Fourteenth Armored Division on April 29, 1945. He was awarded the Distinguished Flying Cross with 3 Oak Leaf Clusters and the Air Medal. After the war he returned to his parents’ farm and soon moved to Vinita, Oklahoma to take a job with International Harvester. In Vinita he met Betty Montgomery, and on April 19, 1946 they were married in her parent’s home. In 1954 Glen and Betty and their two sons moved to Pauls Valley, Oklahoma where Glen began his career with the Federal Land Bank (now Farm Credit) where he served as Manager, Secretary-Treasurer and President. In Pauls Valley Glen was active in the Methodist church where he served as Choir Director. He was President of the Kiwanis Club, served on the Pauls Valley airport board and was active in The Samaritans. He had a strong sense of civic duty and volunteering. He is predeceased by his wife Betty and survived by his sons, Don (Dianne) of Stillwater, OK and Richard of Norman, OK, his two grandchildren Chase (Julie) of Buffalo, N.Y. and Skye (Jon) of Guthrie, OK and his great-granddaughters Stella and Lucy Murray of Buffalo, N.Y., and his great-grandson Clay Sandell of Guthrie, OK. Funeral services are scheduled for 2 p.m., Thursday, July 25, 2019 at the First United Methodist Church in Pauls Valley, Oklahoma with Pastor Diana Pruitt officiating. Interment will be in the Mt. Olivet Cemetery under the direction of Wooster Funeral Home. The family requests memorials be made to the First United Methodist Church, 401 Willow St., Pauls Valley, Ok, 73075. You may send a condolence to the family at www.woosterfuneralhomes.com.

Glen E. Murray passed away July 22, 2019. Glen was born on August 3, 1921 near Dillon, Kansas to Roy H. and Naomi A. Murray. Glen grew up on his parents&#8217; dairy farm with an older brother, two older sisters and a younger sister. In October,... View Obituary & Service Information

The family of Glen Edgar Murray created this Life Tributes page to make it easy to share your memories.